Eighteen-year-old Jared Hill has cancer. He also has a group of very supportive friends.  When Jared’s doctor told him to wear a surgical mask to his prom because of his weakened immune system, his friends decided to don surgical masks, too. A picture of them quickly went viral. 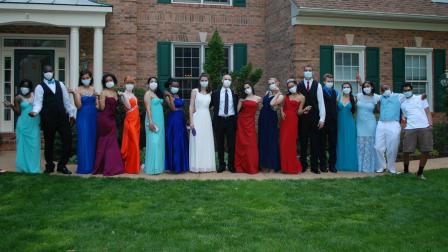 Read the full article and use the questions below to spark a discussion about this story.

As described in the article, Jared’s friends don’t want him to “go it alone” or “feel left out.” Can you think of an instance you saw someone feeling left out or uncomfortable? What did you notice? What did you do?

Talk about a time you felt left out. What happened? What, if anything, made you feel better?

Do you know anyone who has or had cancer? How did you or could you support him or her?

It’s noted in the article that the photograph of Jared and his friends went “viral.” Is it a good thing or a bad thing when a photo goes “viral?” Can it be both?

Peeking Behind the Privacy Curtain
Looking for a Two Bedroom, Two Bath on Mars?
The Politics of Language
A New National Symbol