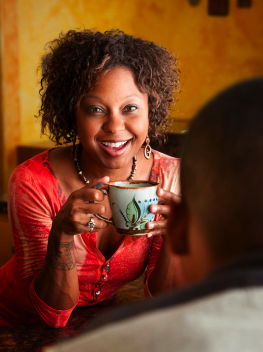 As a therapist, I find that the asking of questions is my ‘bread and butter.’ I try to ask a broad range of questions, as variety keeps conversation interesting, lively and meaningful.

I ask some questions to figure out what the problem is, and others to try to make new possibilities happen. For example, when I ask a man, “What’s the problem in your marriage?” I usually hear what he has been rehearsing in his head for weeks.  But when I ask instead, “What’s it like being married to you?” he has to reorient his perspective and consider himself from his partner’s point of view.

Similarly, at mealtimes, knowing how to sustain conversation and provoke thoughtful answers is important. Think of it this way: A diet of conversation starters won’t be any more satisfying than a meal composed of only an appetizer! So, how do we keep a conversation going? How do we deepen discussion and avoid shutting a conversation down by accident?

Let’s look at this conversation starter as an example: A parent asks, “What was the best thing that happened at school today?” and the child responds,  “Recess.”

Here are some sure-fire ways to stop the conversation in its tracks:

Now, here are ways to deepen the conversation:

And don’t forget, children are question-asking engines, and we can surely let them do some of the question-asking, too. To give you an idea of just how much kids enjoy asking questions, consider this study from Stanford University: A researcher analyzed the recordings of four kids talking to their caregivers for over 200 hours, and found that the children asked one to three questions per minute. At that rate, they were on track to ask a total of 40,000 questions between the ages of two and five!

Sometimes, it may be helpful to think like a child and wonder, “What is it I don’t know?” By embracing the ‘not knowing,’ we can think of some of the best conversation-deepening questions.

Family Dinners are Great for the Body and the Soul
Play with Your Food, Not Your Video Games
The Power of Table Talk
Family Dinner at the White House