“Fast food” doesn’t have to mean unhealthy, oversized meals with high fat and sugar content served in Styrofoam containers. That notion of fast food entered the Merriam-Webster Dictionary in 1951, but fast food has actually been around for thousands of years — Ancient Romans grabbed a quick breakfast of bread soaked in wine from street vendors, and Europeans in the Middle Ages scarfed down pies and waffles sold on the street. 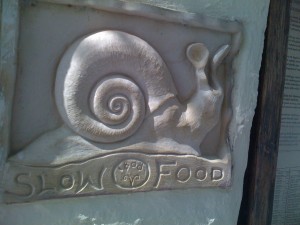 My mother believed in another version of fast food: She loved family dinners, but she hated to feel “stuck in the kitchen,” so she got in and out as quickly as possible. Fast food in our house meant a meal that took less than half an hour, from fridge to stove to table. Heaven help you if you went in the kitchen while my mother was cooking. Fast food meant that she spun around in our small galley kitchen, grabbing vegetables with one hand, wrapping a potato in tin foil to throw in the oven with another, and overseeing a chicken that spun itself on a rotisserie. She was a whirling dervish – her frantic pace left no room for help from family members until it was time to set the table and bring the food out. I have always admired my mother’s efficiency in the kitchen, though I do prefer having family members join me in cooking.

I am a big fan of fast food when I think of it as quick-to-prepare food that is also inexpensive and healthy.  And, I challenge the idea that fast food has to be the opposite of slow food.  The Slow Food movement, started in 1986 as an alternative to fast food, is dedicated to preserving regional cuisine and using fresh ingredients that are harvested recently and locally. The movement also challenges the US government’s subsidies of certain mega businesses, like corn, grain, soybeans and dairy, rather than of farmers supplying their local communities. (For an interesting dinner conversation prompt, see Slow Food president Josh Viertel asking President Obama a question, selected out of 140,000 submitted by Americans, for a recent “State of the Union Q and A.”)

But why not be a proponent of “fast slow food,” or meals that can be cooked quickly from locally raised fish, plants and livestock? Anyone who lives in New England knows the bonus challenge of making a February dinner from locally harvested produce. Scrambled eggs would certainly fit the bill of local, cheap and quick, but here is another meal that also meets those requirements: I have used foods raised, fished, or grown in February in New England. The preparation time is under 30 minutes and priced at well under the Fast Food Challenge budget of $21.

Managing Food Allergies at the Dinner Table
Making the Most of Dinner with Adolescents
Family Dinners are Great for the Body and the Soul
May I be Excused, Please?