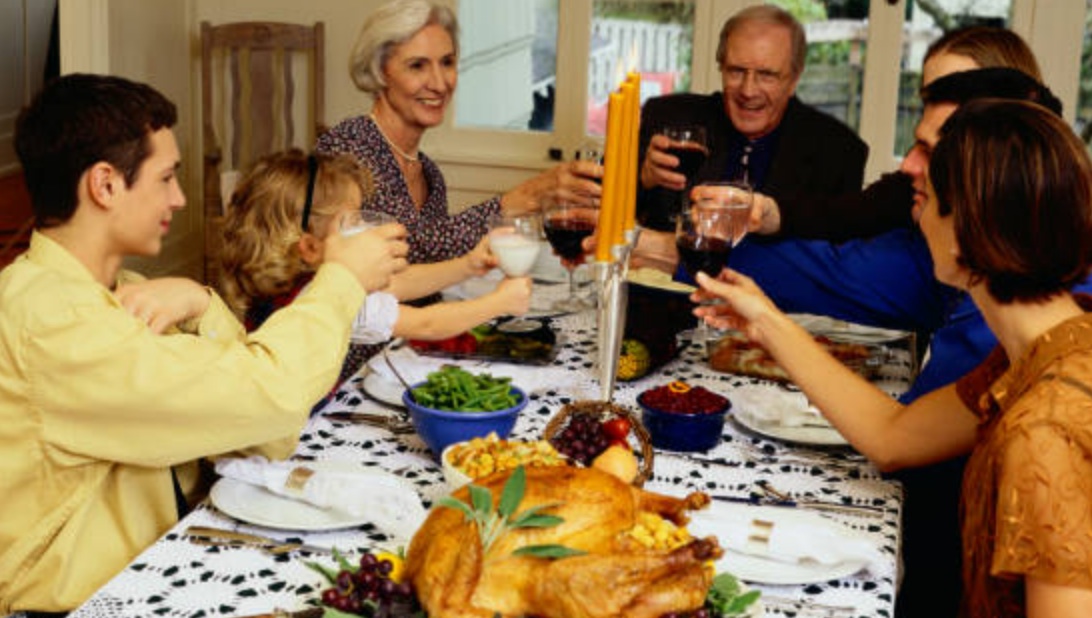 The expression “talking turkey” has two opposite original meanings—either to speak pleasantly around the dinner table, or to skip the niceties and get right to what’s important.  It is, of course, this second meaning that persists in everyday conversation, as when we say, “Let’s talk turkey about why you’re always late to dinner.”

The fact that “talking turkey” originally had two opposite meanings seems fitting since, as a ritual, Thanksgiving itself holds two conflicting meanings. The first is the constancy and continuity of the holiday: It’s always on the fourth Thursday of November, and most American households will be having the same menu of turkey, stuffing, gravy and apple pie, with some variation allowed for sides. Year after year, this holiday reminds us of the continuity of family life, linking us to the generations before us who celebrated the same holiday, and allowing us to look forward as we teach the next generation how to brine the turkey and make sure the gravy doesn’t taste of raw flour.

Yet, against this predictable canvas, there are usually stark reminders of what hasn’t stayed the same, and that is the second meaning of Thanksgiving.  It could be that a child is old enough to eat solid foods this year, or to sit at the table beyond the soup course. Or perhaps a child who had sat silently through many Thanksgiving dinners returns home from college and wants to argue about climate change with her conservative uncle. A grandparent’s death leaves an empty chair. An adult child has gone to spend the holiday with his fiancé’s family. A friend whose husband died is included this year. A parental divorce means that there are two dinners to squeeze into one day. This year, I’ll feel the loss of my golden retriever, who would have vacuumed up pie dough and stuffing droppings while we cooked, and then chosen the messiest member of the dinner table to nuzzle during dinner. I can actually leave the appetizers on a low table without any worry about her scarfing down the brie.

The most constant feature of family life is change. The annual ritual of Thanksgiving gives us pause, makes us think about continuity and usually gives us a little wake-up call that nothing stays the same.

I even feel this tension between sameness and change as I plan the menu. Every year, I flirt with trying new recipes, wondering if we should try a fried turkey in the backyard, make a celery root and apple puree, or try an updated sweet potato dish that doesn’t include the goofy marshmallows.

This year, I asked my young adult sons if they wanted to make any changes to the menu, and they surprised me by saying, ‘Sure, what did I have in mind?’ I always thought that I was keeping the ritual consistent for their sake, but now I realize it’s for mine.  In truth, the only menu change I’m making this year is to create the stuffing outside the turkey instead of tucked inside, but that’s only because I learned that this change was less likely to result in salmonella poisoning, not because I really want to try something new.

I do have one new trick up my sleeve, to honor the idea that rituals need to change to stay fresh. This year, even though there will be no children at the table, I’m going to try to play some games. I’m going to suggest a game of charades before dessert. I’ll divide the family into two teams, and give everyone a stack of post-its to jot down some names to act out, like General Petraeus or Maroon 5.  But, I’m pretty sure that my sons will want to talk turkey with me—they’ll tell me to skip the games and get on with the serious business of heating the chocolate sauce for the profiteroles.