How Dinner Changes When the Kids Leave Home 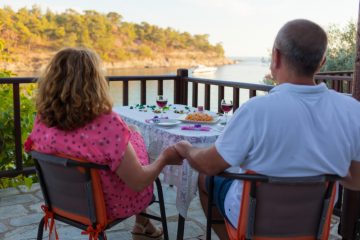 As a couple’s therapist over several decades, I’ve learned that most parents spend months dreading the day their kids move out—whether for college, the military, or a move to a first apartment. But, overall, the empty nest turns out to be one of the best times in a couple’s relationship. Surveys back up this observation—the period that starts when kids leave home until parents’ retirement is now the longest stage in the life cycle and is associated with couples feeling happier with one another than they did when they were in the throes of child-rearing. As with many things in life, the anticipation is worse than the reality.

There is, however, one time of day that can be tough for the newly empty-nested—Dinnertime. The dinner table can feel strange, nostalgic, even lonely, without teenagers to liven things up with their wise cracks, over-sized appetites, and unpredictable moods. Those empty seats at the kitchen table are a nightly reminder that the family is changing.

For many families with children, dinner is a time set aside from the hubbub of everyday life, a time that offers consistency, predictability and stability in the repetition of familiar foods and the gravitating to the same seats night after night. If this predictability brings comfort to both adults and kids, dinner can also help mark the transition from one stage of life to another, providing a way to experiment with changes in a family. Kids’ leave-taking is a molting time for parents, when we can shed one role and try on another.

When my kids first moved out, my husband and I used our new freedom to misbehave—we sometimes watched TV during a dinner composed of cheese and crackers, often eating late because we had been snacking all afternoon. Eventually, we developed some new habits. We ate leftovers because it was easy, and we discovered that we preferred eating vegetarian meals several times a week. When our boys lived at home, they wanted meat most nights and belly-ached when the same food re-appeared twice in the same week.

Discovering new preferences and creating new habits for ourselves helped us to redefine family dinner for ourselves in the absence of our children. Here are some questions to help you think about this new stage of life, to discuss with your partner, or to think about if you are eating solo:

While parents are finding their new footing, kids are creating new groups to eat dinner with — fellow students in the college cafeteria, the other recruits in a military mess hall, or roommates in a first apartment –who may start to feel like family, if family is defined broadly as community or whoever makes you feel like home. This stage of life expands the definition of family dinner to include two adults eating together without children, young adults finding community with other young adults, and single parents seeking the companionship of neighbors and friends to share a meal with.

It’s worth keeping in mind, too, that the empty nest is not always so empty. College kids come home a lot. After all, school is only in session about 7 months out of the year and 50% of young adults will live at home even after they’ve left for college, so this is a fluid state. When my kids first started to come home from college, I made sure to have all their favorite childhood foods on hand. But they had moved on, too. One son wanted to make a fish taco he’d had from a food truck near his apartment in New York City. The other one had visited Vietnam, attending a cooking class where he learned to make egg rolls, Hoi An style and he opted to teach me this new recipe rather than have me make his favorite childhood dish of pasta with pesto and chicken.

I still miss my kids every night at dinnertime. I never fail to wonder what they’re eating, knowing for sure they aren’t eating a black bean burger. But there are new joys to this stage. Years after their leave-taking, my sons send me recipes, perhaps suspecting that without them home to spur on my experimentation in the kitchen, my cooking repertoire is shrinking. So true. But, for me and my husband, the real sweetener of this stage is looking forward to having them make dinner for us in their own apartments.