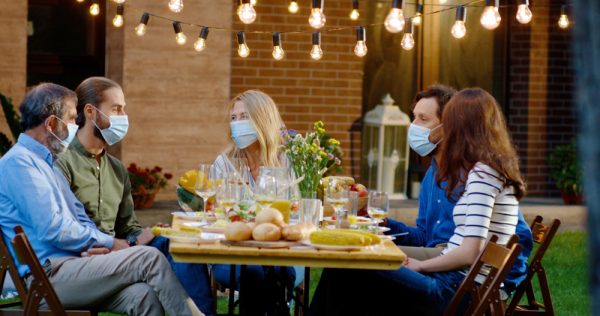 This report was co-authored by Anne K. Fishel, Ph.D., and Melinda Morrill, Ph.D.

In the midst of the devastating covid-19 pandemic, many families have been taking stock of how their lives have changed in positive ways. One such silver lining for many families has been an increase in the quality and frequency of family dinners.

Our new, preliminary research conducted by The Family Dinner Project (based at Massachusetts General Hospital’s Psychiatry Academy), in collaboration with Making Caring Common, suggests that family dinners increased for more than 50% of American families during the pandemic, regardless of race, class, educational attainment, and political affiliation. Shared mealtimes increased even more for those who were married or living with a partner and also for those who were employed.

The majority of families also report that during the pandemic their meals were different from pre-pandemic meals in the following ways:

Prior to the pandemic, most parents said that family dinner was the best time of the day to connect although only 30-45% of families were actually having family dinner. While shared mealtime is a simple idea, it is not always easy to implement. Busy schedules, conflict at the table, picky or selective eaters, distractions at the table from technology, and budget constraints are some of the most common obstacles to families gathering nightly for dinner. But overcoming these obstacles can be very worthwhile. Twenty-five years of scientific studies reveal that regular family mealtimes are beneficial to the physical health, academic success, and mental health of children. There are additional studies that demonstrate that these same meals are also good for the mental and physical health of parents.

Given that the pandemic brought an increase in the amount of time that families were spending together, we wondered how mealtime practices were affected. In a study conducted at Guelph University in Canada during the first few months of the pandemic, more than half of families surveyed were spending more time cooking, eating more meals with their children, and involving their kids in meal preparation more often than they had pre-pandemic. In a large study in the US, UK and Australia, overall scores of healthy eating increased –due to less eating out and more cooking at home. Offsetting these silver linings is the finding that food insecurity more than doubled in families with children during the pandemic. 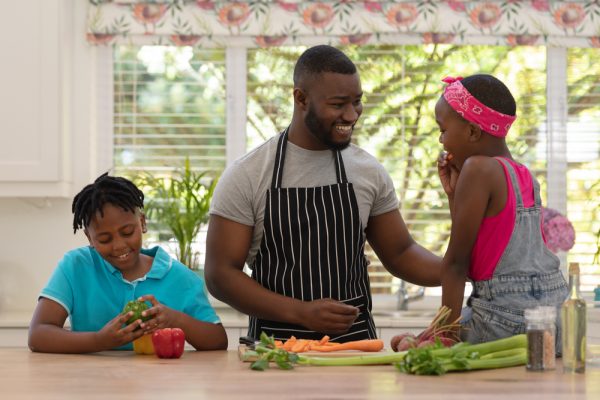 The questions we asked as part of the Making Caring Common survey were aimed at the dinner time practices of families after more than a year of living through the COVID-19 pandemic. Our research was based on a national survey of a diverse cross section of 696 American adults including 444 parents with children living at home in late May 2021. The heartening findings:

All of these aspects of family dinner can contribute to a lively, warm atmosphere at the table which is the crucial contributor to children deriving the scientifically-proven mental health benefits from family dinner.

The specific results are as follows: 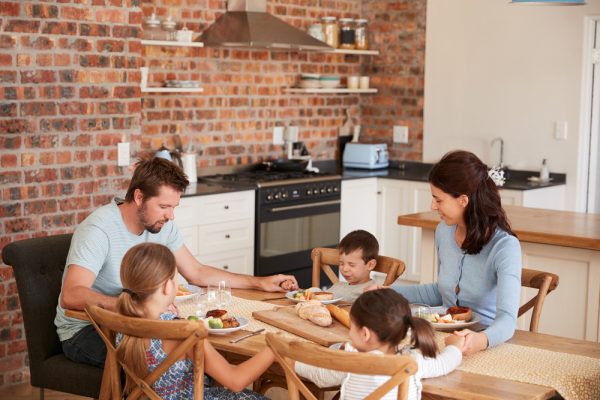 The politics of meals during a pandemic

At a time in our country when we are very polarized about so many issues related to the pandemic—from views on mask mandates to vaccines– we looked at respondents’ dinnertime practices by political party. Quite striking were the findings that many aspects showed no difference between self-identified Democrats and Republicans.

There were no differences between red and blue respondents on the following:

There were, however, significant differences between Democrats and Republican on three aspects of dinnertime conversation: 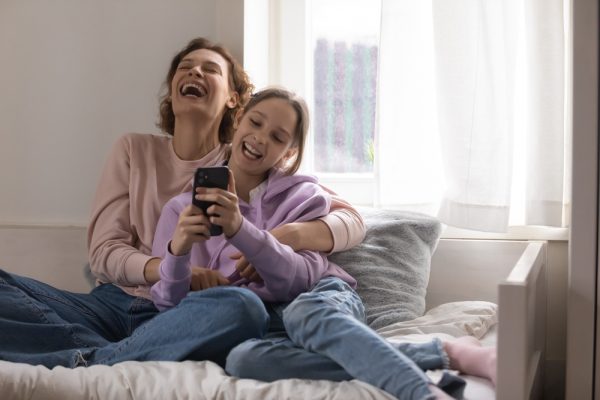 What changes do parents want to carry forward after the pandemic is over?

More than half of the parents surveyed made changes to both the frequency and quality of mealtime practices that they want to carry forward even after the pandemic is over. Only 7% of parents said they planned to have fewer dinners after the pandemic was over, while about 40% anticipated that they would keep family dinner time the same as before, and 53% of respondents said that they had made changes during COVD that they’d like to continue.

We asked parents to say in their own words what, if any changes made during the pandemic, they want to hold on to going forward. We heard four main types of changes that parents pointed to.

Of the other 47% of families who don’t plan to hold on to any changes made during the pandemic, there were several reasons offered.

In summary, parents were split almost equally between those who had discovered positive changes to their pandemic family mealtimes that they planned to continue, and those who hadn’t made such discoveries or who didn’t like the accommodations they’d had to make. Not everyone found that the pandemic had improved or even changed their dinners. Some had been pleased with their pre-pandemic dinners so didn’t want to make any changes and some were fed up with the increase in cooking and togetherness. For those who did make changes they want to keep, they pointed to the increased frequency and to the enhanced quality of their pandemic dinners. Of course, increased food insecurity due to covid-19 is something no one wants to continue.

For those who are able, many of the 70% of meals that were eaten outside the home pre-pandemic, may be brought to the kitchen table. During the pandemic, many families had the chance to discover the pleasures of shared mealtimes, even if it was a forced option during a devastating pandemic. An increase in the frequency of family dinners and the improvement of their quality, in terms of more laughter and conversation, may be a positive after effect of the pandemic. An uptick in the number of shared mealtimes and the increased connection around the table can lead to more mental health, nutritional, and academic benefits to children. 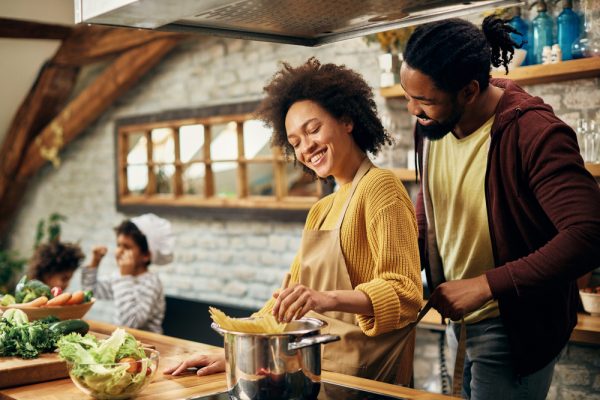 The online survey was conducted via Amazon’s Mechanical Turk or Mturk, a fee-for-service survey panel that attracts diverse samples (i.e., Workers) from all over the United States and other countries. The combined, weighted sample included 670 respondents, with 444 being parents with children at home. Of those who responded, 44% of those parents were male, 10% were Black, 66% were White, and the average age was 41-years-old (SD = 12; ranging in age from 19-91). The survey was designed in Qualtrics and disseminated through Mturk to U.S.-based adults over 18 years of age, in late May 2021. One of Mturk’s features is its system and premium qualifications; as such, we requested respondents who were in the U.S. and had a 95% approval rating (meaning, their surveys get approved by researchers or those requesting their participation 95% of the time).

The survey included about 40 primary questions (with some open-ended response options) largely developed by Making Caring Common, with 10 questions developed by The Family Dinner Project. It took participants on average 18 minutes to complete. Upon completion of survey data collection, we went through several rounds of systematic cleaning, including careful analysis of open-ended data that illustrated about a third of the initial sample comprising ‘fraudsters’ (see here). Once we established our final dataset, we used raking to generate sample weights which matched the sample to the population of U.S. adults on gender, race, age, income, educational attainment, and political party or affiliation. All results presented incorporate the survey weights in order to attain better estimates of the U.S. population. Population values for gender, race, age, income, and educational attainment came from the U.S. Census, while data for political party came from the most recent Gallup survey available. Even with sample weights, our sample was disproportionately working age (i.e., 18-65), highly educated, middle, and upper class. Efforts should be taken in future surveys to recruit and even more representative sample. Still researchers have found that data obtained from Mturk respondents are consistent with those obtained from other widely used and accepted samples. (Huff & Tingley, 2015).

Regarding other survey limitations, some threats to internal (e.g., attention or motivation) and external validity (e.g., generalizability) using Mturk have been reported (see here). Nonetheless, researchers have found that results obtained from Mturk samples are consistent with results obtained from other widely used and accepted sampling pools (see here and here).

Duke, M.P, Fivush, R., Lazarus, A., Bohanek, J. (2003). Of ketchup and kin: Dinnertime conversation as a major source of family knowledge, family adjustment, and family resilience. The Emory Center for Myth and Ritual in American Life, Working Paper No 26

Huff, C., Tingley, D. (2015) “Who are these People?” Evaluating the demographic characteristics and political preferences of MTurk survey respondents. Research and Politics, July-Sept 1-12.

NPR/Robert Wood Johnson (2013) A poll about children and weight: Crunch time during the American work and school week-3 PM to bed

Sen, B. (2010) The relationship between frequency of family dinner and adolescent problem behaviors after adjusting for other family characteristics. J Adol, 33 (1): 187-86.