Anyone who knows me well finds it ironic that a person as unskilled at family dinners as myself works for an organization called The Family Dinner Project. In return, I point out to them that my job is not to be an expert on family dinner. Or a great cook. Rather my job is to be a writer, an editor and a purveyor of extraordinary web content.

But to separate the mission from the mama, I’ve found, is almost impossible. I mean, how can one work for an organization built upon the benefits of family dinners without wanting those benefits for her own family? How can one avoid trying out the recipes, the games, and the conversation starters she’s creating, editing and reading almost daily? 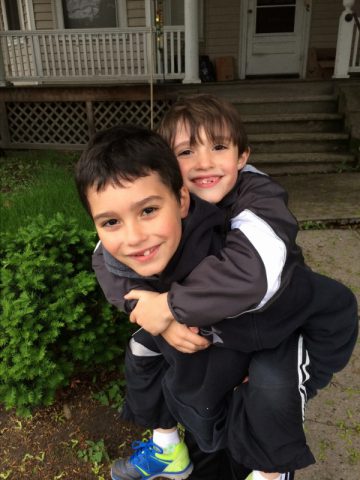 Boys goofing around before dinner

Last year, I began posting about my challenges and progress around family dinners in a series I titled “Baby Stepping.” The timing of my efforts to improve our family dinners (documented here and here thus far) wasn’t the best, as I was going through treatment for breast cancer. But still, I made small attempts. In April, I wrapped up my treatment, and this summer, I’m feeling great and ready to make some more serious efforts toward better family dinners. Here are the goals I’ve set for myself:

Do you have any baby steps you’d like to take this season?

Family Picnic #1: Chicken Salad and Active Play
Dinner and a Movie: Food, Fun and Conversation About Anti-Racism
An Urban Barn Raising
Bringing Common Sense to Media Use at Waring School