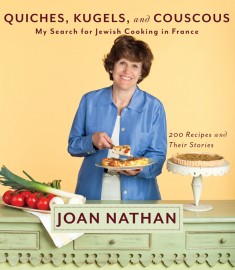 Ever wonder what family dinners are like in the house of a famous and prolific cookbook author? Here Joan Nathan opens up about food, fun and conversation at her own dinner table, and the sacredness of the family meal.

Could you please describe your family dinners growing up?

I lived in two houses growing up. One was in Larchmont, New York, and the other was in Providence, Rhode Island. Each house had both a kitchen table and a dining room table, but we always ate dinners in the dining room. The table always looked pretty – it was always covered and you’d never see anything like a ketchup bottle on it. We’d dress a little special too. No jeans, for instance, and my father would serve the food on a trolley.

What about now?  Tell us about your household today – what does a typical week look like in your home in terms of family dinners?  Do you do the cooking; how often do you all sit down together?

If we eat at home, I’ll cook.  Friday nights we always eat at home together for Shabbat, and we also invite other couples.  We even do it if we’re away. Martha’s Vineyard is not a particularly Shabbat dinner-oriented place, for instance, but we have it wherever we are.

My kids do the same, wherever they are.

When your children were still all living at home, what were some of your “go-to meals”?

I tried to do dinners the way my mother had, although not as lavish.  My kids’ favorite meal was pesto w/pasta, different vegetables including string beans, and a salad.  Roast chicken was another go-to meal; I’d stuff the chicken with preserved lemon and use this juice over the chicken, then throw in lots of vegetables.  In those days I was always testing recipes – and the kids were a part of this.  They were the beneficiaries of these taste tests, though maybe they didn’t always feel that way.  My son once wrote a college essay on how he was deprived as a child because he couldn’t get Oreos. He had to have Moroccan cookies instead.

Looking back, how would you have defined a “successful” or “memorable” meal with your family?  What was “fun” for your family meals?   What were the biggest challenges that you remember?

Well, as for challenges, my middle child was hostile toward me for a while, but I don’t think she remembers that. She remembers having fun at the table.

As for cooking, when you’re busy, cooking is hard…especially if people in your family like different things.  In my house, no one had any food issues or allergies fortunately.  I just made a meal and if they didn’t like it they could have yogurt.  Making different meals for different people is awful.  There’s always something for folks to eat without you having to cook different meals. I also tried to involve my kids in the cooking. Like the chicken dish I mentioned earlier. We’d take all these vegetables, put things together. I think it’s important to involve your family, to teach them how to cook.

Can you share a little about conversations at the table?

I’d ask my kids what were the best and worst parts of their day. Best and worst is such a good game. Someone will pipe in, and you’ll get into a larger conversation about it.

You want the time to be enjoyable, so you don’t want to bring up sensitive subjects such as weight, for example.  In the Cheaper by the Dozen series the father would ask, “What have you done for God and your country?” This kind of question makes you think beyond yourself, which is so important. I like it when people become involved in other ideas.  It’s interesting, and it makes you a more interesting conversationalist.

My kids are in their thirties now and we still play the best and worst game! You never finish, but you get people to start talking.  My son just arrived today, and we went swimming and then we pulled lunch together. We set a table on the porch and invited a neighbor over and had a great salad from leftovers.  That’s the joy of having family together—this time where you eat and you’re not on your cellphone or with a lot of people, distracted.  We talked for a long time.  It was simple, but it was the best. If my kids were growing up today, by the way, there would be no cell phones at the table. Yes, we’re all obsessed with our phones but we would not bring them to the table.

Most of your cookbooks are about preserving Jewish traditions. Thinking about your children, what family dinner habits did (and do) you hope to pass along to them?  Are there culinary or conversational traditions that you’ve tried to encourage?

Conversation is never difficult in my family.  Everyone’s doing interesting things and has great ideas.  Some people dominate the conversation, and the hardest part is making them realize that there are others who also need to talk.  I would hope that good manners have been passed down.  Making their own bread, challah – they do that.  My daughter did this while traveling.  A lot of these things are universals.  Symbolism of food is incredibly comforting to people; what you eat is important, how you eat, and the conversation that goes with it.

What specific suggestions might you offer to other families to help them with their own family dinners or make them more meaningful?

Get the kids involved. Have kids make salads where they cut up the vegetables.  Have them set the table. When kids are in high school, they can make a meal once a week.  Early on, I think it’s important to take them with you to the grocery store. The more that they’re involved with things, the more types of food they’ll eat.

Soccer games and other things at night can make family dinner hard, but to me, a meal together is more sacred than anything. It shouldn’t be a time when you’re airing grievances. You want people to come to the dinner.  It should be a symbolically positive place where your family is comfortable, and where their friends are also comfortable.

And here’s something meaningful you can do that I learned from Alice Waters: I would take a peach and cut it up and put it on pretty plate, then put it out on the table.  In essence, I gave my family the peach with the thought: I’d much rather have just a piece. It tastes better, is simpler to eat than a whole peach, and you don’t get juice all over you.  If the peach is freshly cut up by you, the person serving the meal and not someone at the supermarket, it’s more like an offering. 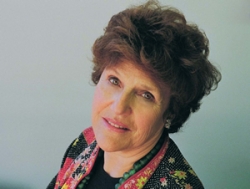 Joan Nathan is the author of ten cookbooks including her most recent Quiches, Kugels and Couscous: My Search for Jewish Cooking in France (Knopf), which was named one of the 10 best cookbooks for 2010 by NPR and Food and Wine and Bon Appetit magazines. She is a regular contributor to The New York Times, Food Arts Magazine and Tablet Magazine.

Here Joan Nathan demonstrates how easy it is to make the roast chicken mentioned above in your own kitchen.