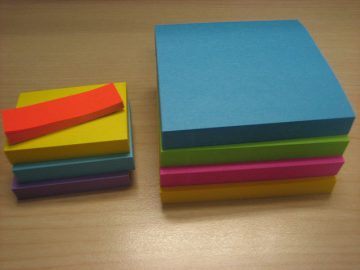 A recent act of kindness by a student in Calgary not only drew worldwide attention, but also a punishment from her school. When high school junior Caitlin Prater-Haacke was bullied on Facebook, she decided to turn the experience into something positive. Caitlin wrote encouraging messages on Post-it Notes and stuck them to her classmates’ lockers. Her school called it “littering.”

Read the full story in the Calgary Sun, then get your kids’ reactions:

Have you ever stood up to a bully? What did you do or say? How did things turn out?

Caitlin handled an upsetting situation by turning it into an example of showing kindness to others. Can you think of other ways you could be a role model for kindness?

Have you ever seen a negative or bullying post on social media? Do you think it’s more common for people to be unkind to each other on the internet? Why or why not?

Caitlin’s school disciplined her for littering after some of her Post-It Notes fell down. What do you think about this decision?

The community in Caitlin’s hometown decided to follow her example by declaring a “Positive Post-It Day.” Begin your own “Positive Post-It” movement by challenging each member of your family to write 10 anonymous notes of kindness for others, with a message at the bottom that says:
“Pass the Positivity! Write 10 kind notes and leave them for others. Make sure to tell them to pass it on!”