Let’s Give This Girl a Medal! 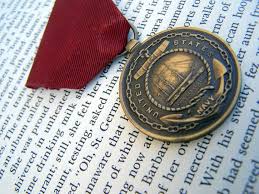 Eighty-seven-year-old Charles Mowbray, a World War II veteran Navy sailor, never received his medals. Turns out the United States government forgot to send them to him. While he laughs when talking about this oversight, eight-year-old Leanna Morris takes the issue much more seriously.

Leanna met Charles at her elementary school in Salisbury, Maryland, as part of a living history lesson in which Charles would come in to talk with students about his experiences in the war. Leanna noticed that although Charles would show pictures, he had no medals he could share.

“He fought for our country and our freedom,” she said. “Everyone deserves something for that.”

Leanna took it upon herself to write a letter to her senator requesting the medals—and her letter worked. Watch the heartwarming video here to see exactly how, as the narrators says, “An eight year old corrected a 67-year-old injustice.”

Have you ever stood up for someone when you thought they were treated unfairly? What did you do and what was the outcome?

In the video, Leanna refers to Charles as “brave.” Who do you know that’s brave? How are they brave?

If you could give a medal to someone you know, who would you give it to? And for what? Feel free to give medals to more than one person!