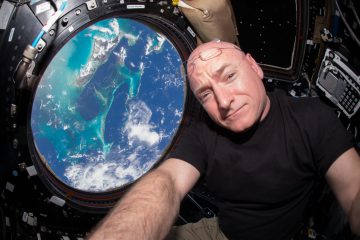 Astronaut and new internet folk hero Scott Kelly broke a record this week when he returned to Earth after 340 consecutive days in space. During nearly a year in orbit, Kelly gained a tremendous following on social media through his breathtaking photography, sense of humor and quirky science experiments.

Coupled with Kelly’s achievement is the larger scientific impact that may arise from his time in space. Researchers are studying not only Scott Kelly’s physical health, but also the health of his genetically identical, earth-bound twin, retired astronaut Mark Kelly. What they learn from the Kelly brothers may change the future of space travel and even make possible, someday, a colony on Mars.

Read about the record-breaking space journey here, then talk about it with your family:

How to Talk About the Border
Talking to Strangers
Family Picnic #12: Chicken Souvlaki and Ice Cream Dance Party
Three Strikes and You're Out