Since I joined The Family Dinner Project team several months ago, I’ve learned what most of the parents out there already know — that cooking with children is a messy, noisy, energetic, exhausting and sometimes scary process. It’s also one of the most fulfilling things I get to do all day.

We had so much fun making soup with Centerboard, the afterschool literacy program run by local Lynn social service agency, that we decided to do it again. We arrived at the Boys and Girls Club in Lynn, MA equipped with the ingredients to make enough potato dill soup (see below) for twenty five families!

While Joanna and I set up to cook, Centerboard’s Jan Plourde read Stone Soup to the group of children. In the story, impoverished villagers initially hesitate to share any food they have. However, each community member eventually lends an ingredient to make a delicious and nutritious soup for everyone to share — perfectly complimenting the afternoon’s activities! 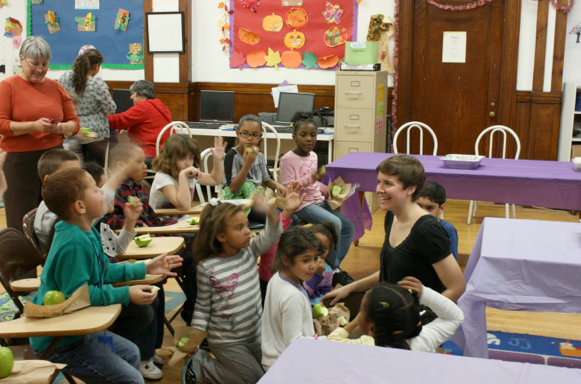 The first order of business for the group was making animals out of bread dough. The recipe, also below, came from Joanna’s kindergarten teacher who used to make bread with her class every Friday! (Can you even imagine?) With the bread cooking in the oven and making the room smell delicious, we were ready to get to work on the main course. 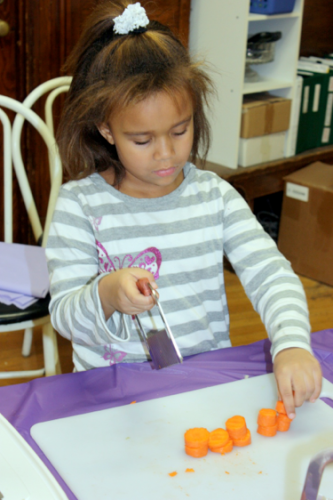 This time we were slightly better prepared for the challenges of cooking with more than twenty children at once. We set up stations for the children so that everyone got a chance to cook. In an assembly line-like fashion, the groups washed veggies (using toothbrushes to scrub all the dirt off of carrots and potatoes), made menus and placemats, sprinkled seasonings into the soup pots and chopped ingredients. Since this was their second time cooking with us, the little chefs were practically pros.

A number of children took soup home for their families while others stayed to share food, fun, and conversation with The Family Dinner Project team. We played games like “I Spy” and talked about thankfulness. To celebrate FDP Executive Director John Sarrouf’s birthday, the children surprised him with candles in the apple crisp and a rousing rendition of “Happy Birthday.” 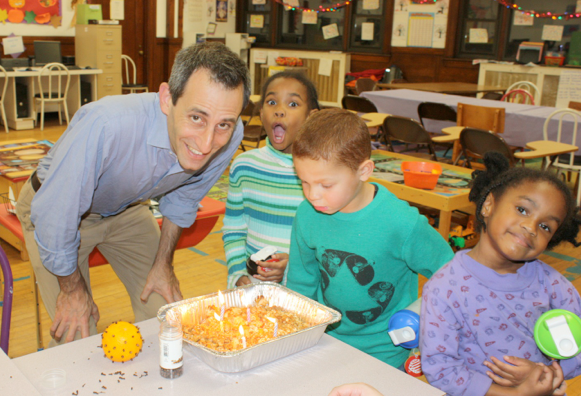 At the end of the dinner, I was exhausted (and covered in soup) but happy as a clam. I’m already looking forward to our next dinner with the Centerboard group in a few weeks! Until then, here’s the recipe we used for our soup:

6 cups chicken or vegetable broth
4 or 5 large potatoes (diced)
Salt to taste
Add and simmer until potatoes are tender, 20-25 minutes. Mash some of the potatoes in the broth mixture for a creamier texture.

And of course, the delicious bread recipe: