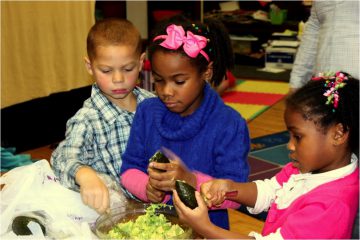 The menu was hearty: homemade guacamole, tossed salad (with dressing prepared on the spot!), a vegetarian black bean soup and fruit dipped in chocolate fondue for dessert. And to think, it was prepared almost entirely by a group of elementary school-aged children!

Last Thursday, The Family Dinner Project briefly took over the after-school program run by Centerboard at the Lynn Boys and Girls Club, where we held the first in this winter’s Community Dinner series. Before parents even arrived, The Family Dinner Project’s Joanna Gallagher and I had children cleaning surfaces, washing dishes and chopping fruits and veggies using special kid-friendly knives.

The group’s enthusiasm for cooking was nearly overwhelming, with each child clamoring to help in whatever way possible. Some came into the kitchen to assist in cutting carrots, onions and celery. Others took charge of the décor by putting out tablecloths, napkins and placemats, and making sure each table had enough water cups and soup bowls. The children were very excited to assist with preparing dinner in any way possible, and they took pride in the work they had done when parents arrived. 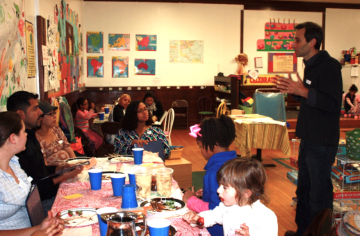 FDP’s Executive Director John Sarrouf kicked off the evening with a conversation about the importance of family dinners. (Did you know that children learn more words at the dinner table than they do when someone reads to them? This sets them up for academic success because children with bigger vocabularies understand school lessons better and read more!) The families then gathered around a large table and made guacamole. The children particularly enjoyed scooping the green insides of the avocado into a bowl and mashing the ingredients together with forks.

Not long after, soup was served—the perfect meal for a cold, rainy November night. While they ate, the children interviewed their parents about their childhood family meals.

After the soup, the parents gathered to swap stories about family dinner, and brainstorm solutions to common difficulties. 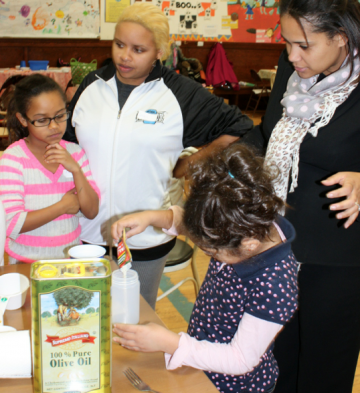 Meanwhile, the children set up an assembly line dishwashing system, and chopped and plated fruit for dessert.

It was amazing to see the little chefs’ excitement throughout the evening, which translated into a willingness to try foods they’d never had—or liked!—before. One young girl grinned as she ran over to her mother, chewing on a chip dipped in guacamole. “Mom, I like it!” she cried.

During the main course, I watched a 9 year-old girl push a few chopped carrots around her bowl, before hesitantly placing one on her spoon to give it a try. And as everyone left, an amazed father watched his son fill a plastic container with leftovers like pineapple, strawberries and bananas. “He never eats this way at home,” he remarked. 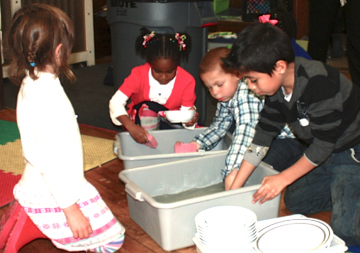 Overall, the first Community Dinner at the Lynn Boys and Girls Club was a resounding success! The group will gather again in December and January. Stay tuned to hear more about what they learn about family dinners—and what I learn about cooking with little chefs!

Grace is the project organizer at The Family Dinner Project, where she helps organize family dinner events and workshops. When she’s not thinking about what to make for dinner, she’s learning to play the baritone ukulele.