Lunching and Learning at the Ford School 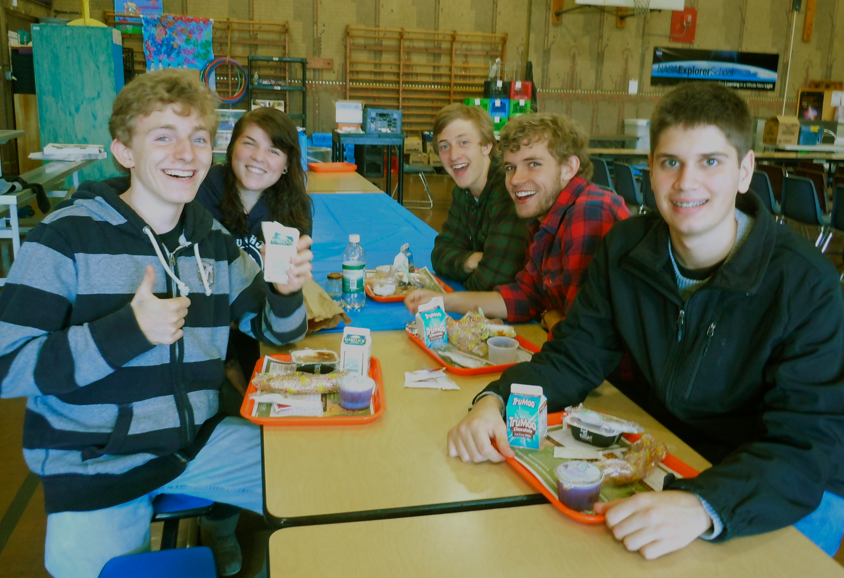 Since January, seven of us Gordon College students have been eating weekly lunches with students at Ford Elementary School, as part of The Family Dinner Project’s new Lunch Mentors Program (or, the “lunch bunch,” as we like to call it). Having consumed many lunches in our lives, we college students considered ourselves experts at the task. We were excited to impart the wisdom that comes with experience to the kids at the Ford School…only to realize that we  have much to learn about conducting mealtime conversations ourselves!

Each week, we share lunches with three student groups of different ages, and each week we marvel at the variations between the groups’ conversations.  Often, the kindergarteners fill their discussions with richly imaginative non-sequiturs. For example, the question, “What did you do this weekend?” could prompt responses as varied as “How old are you?” and “Would you say that the branches of that tree look like a unicorn?”

In these moments, we smile and respond to their unexpected responses. After all, improvisation and careful listening are just as important as coherence to a good conversation.

Discussions with the older students—fourth and fifth graders—can be a bit more challenging. Often, when silence or non-sequitur comments occur, it’s due to our failure to be engaging. It can be tough to deal with that rejection! And it can be tempting to steer the conversation towards pop culture, since that is sure to be well-received (The Hunger Games and football games have become go-to conversation starters in these situations).

Directing conversations toward ethical topics can seem less appealing. Why is this? Ultimately, I’ve come to believe that it’s not that kids have an aversion to substantive conversation, but that we college students shy away from such topics too easily. Often, even as “grown-ups,” we do not have these deeper conversations during meals in our own lives, and so we’re out of practice!

This experience has made me realize how much the Gordon College and Ford School students have to learn from each other. There we were, ready to facilitate quality conversation, only to realize the poverty of our own conversational skills! In this aspect, our discussions at the Ford School have proved more enriching than I initially thought possible. They have prompted my co-volunteers and I to have deeper conversations not only with our student lunch partners, but with our families and friends, as well.