The Where of Family Dinners

Does it matter where you eat dinner? At a round or rectangular table? In the kitchen or in the dining room? On a picnic blanket or at a table? On chairs or on the floor? Do you always sit at the same place at the table? Do you think your dinner conversation is affected by these spatial elements? 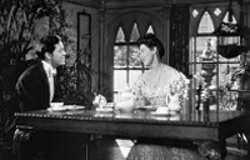 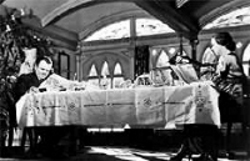 In the film Citizen Kane, Orson Welles shows the deterioration of a marriage using the changing size of a dining room table to mirror the increasing emotional distance of a couple. Watch the video.

The first scene shows a young couple sitting next to each other at a small table, engaged in romantic banter. In each successive scene, the table becomes more crowded and the couple is seated further apart. In the ninth and final scene, they are sitting at opposite ends of a long table, reading rival newspapers — the collapse of their marriage is reflected in the spatial features of the table. Our sense of emotional closeness can be keenly felt by the physical space between us at the table. Often a smaller table feels more conducive to easy conversation.

My young adult sons would much rather crowd around our too-small kitchen table for dinner than let their 6-foot-plus frames sprawl and spill around our more spacious dining room table. It’s not just the smaller size that feels cozier, but eating in the kitchen feels homier than eating in the dining room, which is where guests eat, not sons reclaiming their places at the regular family table.

No matter how long they’ve been away, my sons always tuck into their customary seats around the table — the two most comfortable seats on a padded bench with pillows, with the added benefit of being the furthest points from the stove and fridge. The dog’s bed is nestled next to the table, which gives the bench-seaters a good reason not to get up, since they might disturb her sleep if they stepped over her. 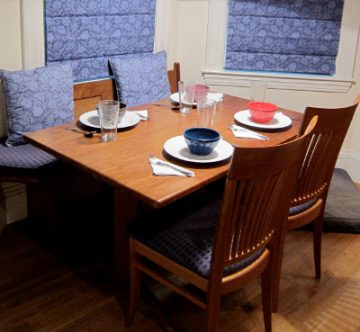 When I talk to other families, most tell me the same thing: each family member sits in the same chair night after night. No one can quite remember how these decisions were made. But, in most families, it is considered a subversive act to claim a seat that isn’t yours. In my husband’s family, the girls sat on one side of the table, nearer the stove, so that they could spring up to get more food, while the boys sat on the far side. As with most rectangular tables, the parents sat at either end, connoting higher status as heads of the table.

But sitting on chairs around a table isn’t a universal custom. In many societies, chairs and tables are seen as stiff and formal, useful mainly for conveying status. Often they are reserved just for solemn occasions. The only position that connotes higher status than sitting is lying down — thus the extreme luxury of being served breakfast in bed.

Many people sit on the floor to dine, with trays of food. Another common custom in other cultures is for each diner to have his or her own table. The formal Japanese diner, for example, has a small lacquered table all to himself, or he might even have 2 or 3 of them. Greeks in the Classical period each had a small oblong three-legged table. Food might be plopped directly on the tabletop. A new course was called second or third tables, with each new course arriving on a separate table that was light and portable. 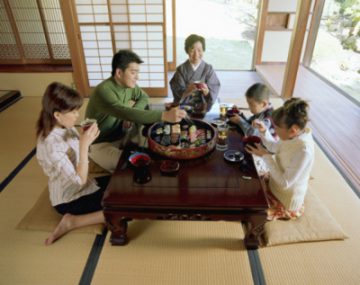 Many American families eat dinner around a kitchen island. My friend Wendy, a mother of four kids, compared the quality of conversation that her family has when dining at the island rather than at a table:

“When kids sit at an island, they expect to be served, and I feel more like a waitress (because I’m standing on the other side and not eating at the same time) with very little discussion. But when we all sit down together, it’s more of a collaborative experience — we all eat and talk together.”

Family dinners can be jazzed up by introducing a new recipe or by having a guest come to dinner, but family dinner conversation will be affected by paying attention to space. Try spreading a blanket on the floor and eating dinner without chairs, in a different room, or outside. What happens when no one sits in customary seats? Is there a round table to sit around instead of a rectangular one? What if you sit very close or with more distance between seats? What spatial ingredients lead to the best conversations in your family?

Let’s Talk Turkey
May I be Excused, Please?
The Politics of Thanksgiving
Building Resilient Kids, One Story at a Time