A Solution to Resolutions 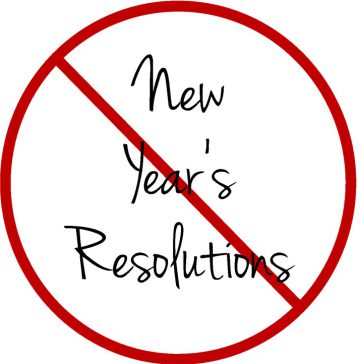 I’ll admit, I’m a scrooge when it comes to New Year’s resolutions. I’ve never made them and, honestly, I don’t really believe in them.

For one thing, January is just too hard a month to be adding another challenge. On these longest, darkest days of the year, making promises to be a better person, to eat fewer chocolates or to save on fossil fuel emissions by riding the T more often is like trudging up a mountain while lugging an extra 50-pound backpack. January is about putting one foot in front of the other and counting down until the days start lengthening by Groundhog Day.

If I were to commit to a new behavior, it would be in September when my brain is programmed for new starts after so many years living on an academic calendar. Or April might be a good time to start a program of self betterment:  I’ll take my inspiration from budding trees, new green shoots and flowering bulbs—if they can try again, so can I!

Then, there is my professional objection to New Year’s resolutions. As a clinical psychologist, I know that if I restricted my clients to January as the month for behavior change, I would have a practice that mirrored a ski resort. The season would open in late December when I helped my clients identify the behaviors they wanted to change; then, January would be high season; and February would be a time of mopping up from the sliding and slipping of resolutions that didn’t take hold. We’d be done by March. Instead, as a therapist I believe that every day of the year holds the possibility of making a promise to start a new behavior or cease a self-destructive one.

So, I’d like to suggest another approach to this month: using the good behaviors we’ve already got stocked up. Think of it this way, if we lived during pioneer times, January would be the month when we’d be dipping into our jams made from summer berries. In this spirit of preserving and conserving, I suggest that we use January to focus on what’s already going well, rather than trying to blaze a new behavioral path.

This isn’t such an easy task. When I ask my clients to tell me more about a really good week, they are much more tongue-tied than when it comes to chronicling a series of fights or slights. I think we aren’t as good observers of positive behavior as we are of negative behavior. And, parents aren’t as practiced at “interviewing around successes,” as they are at asking their children about problems.

Here are some ideas to help you hunker down in January to enjoy the fruits of enjoyment and success that are already stored up in your family.

And just as January doesn’t need to have a lock on being a time to start a new behavior, focusing on the good things that are already in place can happen any month of the year.