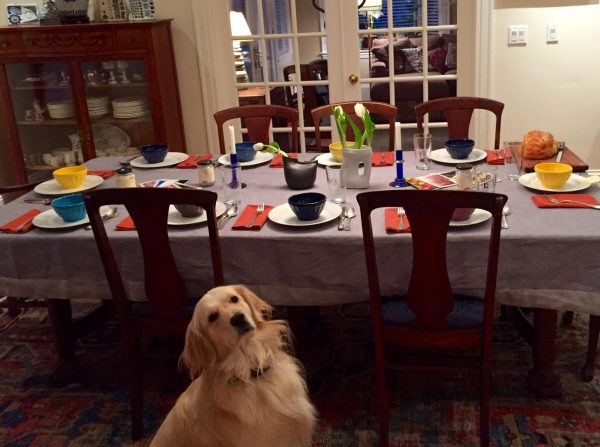 Before the pandemic, there were few things I enjoyed more than hosting a meal for friends and family. During the last two years, however, I have mainly kept my gatherings to my immediate family—my husband, my golden retriever, and me. Both my husband and dog are very appreciative of anything I cook. But as fun as our little trio has been, I decided it was finally time to invite a group of our friends to dinner. And if hosting is a muscle, mine had withered to the point of almost immobility. Boy, was I rusty.

I chose a menu that I’ve made dozens of times before –squash soup, salmon with pesto, and meringues for dessert — anticipating that this would not be a great moment to experiment with a turducken or dacquoise. One kind guest had offered to bring a salad. So, I thought: How hard could this be?

As it turned out, like trying to walk again when your leg has been casted for two years. So much felt effortful and unfamiliar. Five minutes before my guests’ arrival, I noticed there was dog fur everywhere and the front walk was littered with sticks. Speed vacuuming and a mad hunt for the broom made the entryway presentable, even if I was a bit breathless when I answered the door. I had asked everyone to take a rapid covid test before they came. But what if someone had forgotten? Indeed, one guest arrived with an unused test, which she deployed on our porch with a glass of wine. I think she was a bit annoyed to be detained.

Once everyone had arrived, I tried to remember whether to go right to the table or mill about. Did we used to play music during dinner or does that make it too hard to talk? And, speaking of talking, no one had been anywhere or done anything to tell a story about, so the conversation was slow to get going. The timing of the courses was bumbling. The main dish was ready before the soup. I’d forgotten to make the meringues ahead of time, so dessert was delayed until the oven was cleared of the fish to make room for the low temperature needed to bake the cookies. They might have tasted a bit fishy. Well before the dinner was over, I was exhausted. I felt as though I had just catered a huge wedding, rather than a modest gathering.

I wasn’t the only one who was feeling the pressure of hosting. My husband, usually the cooler cucumber in our marriage, had woken me in the middle of the night with a nightmare. In the dream his entire family, including both living and dead members, had arrived toting dozens of other uninvited guests. My husband went from one crowded room to the next where all the guests were angry at him for his poor planning. Ok, you don’t need to be Freud to interpret this as an anxiety dream about hosting.

Nonetheless, I decided to call Dr. Deirdre Barrett, a Harvard dream researcher at Cambridge Hospital who has collected 13,000 dreams from 89 countries since the pandemic began. She has even written a book, Pandemic Dreams.

“What do you make of my husband’s dream?” I asked her. Well, she said, “Like most COVID dreams, dreams about family dinners and gatherings have been anxious ones. Your husband’s dream is like dreams about going back to work or school. Will I still be able to deal with the workplace or be adept at hosting again? Do I still know how to do normal things?” She reassured me that my husband’s anxiety dream wasn’t the worst she’d heard. One woman dreamt that she went to a family gathering where her niece had aged 6 years, not 2, and had no idea who she was and only pretended to recognize her. Another woman dreamt that she came home from work with a plastic briefcase stuffed with food that melted in the microwave. Her husband was furious with her for ruining the meal. Another dreamer reported going to a dinner party that featured cannibalism. I did feel reassured that my husband’s dream sounded rather humdrum.

While I had Dr. Barrett on the phone, I wanted to learn more about what she’s learned from the thousands of dreams she’s collected since March 2020. Such a stockpile of dreams is like a giant MRI of our collective unconscious. What had she learned about our emotional state after everything that’s happened?

Early on, she told me, dreams were primarily about the fear of catching the virus. Many were literal dreams about exposure to the virus, while others were more metaphorical like wild animals or insects attacking and natural disasters. As the pandemic wore on, Dr. Barrett reported that there were more dreams about isolation, like being thrown in prison or stranded alone on a spaceship. And among those sheltering with family, there were dreams about overcrowding, like the whole neighborhood moving in. The most prevalent dreams were about being out in public without a mask or one that flew away, like the classic shame dream of being naked in public. She is updating her book to take us up to the present moment, which I imagine will include many more dreams like the one my husband had, indicating anxiety about a return to our old habits.

So if you’re feeling anxious or overwhelmed about hosting and socializing again, or having unusual dreams, take solace in the fact that you’re certainly not alone. Hopefully, with time and practice, our old social gathering muscles will rebuild, and our dreams will shift again. For my part, as I continue to host more get-togethers in the months ahead, I hope my dreams will start to include images of hugging my unmasked guests and serving a sky-high chocolate soufflé.