Meeting Your Child’s Sweetheart: 12 Tips for a Successful Meal

It’s hard to be our best, most authentic selves when our children bring a significant other home to dinner. As both generations wonder how they’re being sized up, it’s only natural that the meal feels a little tense and awkward.  The parents may be fast-forwarding, wondering whether this interloper could one day be an in-law. The young guest may feel in the hot seat, while also questioning what he or she could be getting into if the relationship becomes a “forever” one.

When I first brought home my 20-year-old boyfriend, my usually stylish mother greeted us in her bathrobe, as if to say, if I dress casually, maybe I can pretend this isn’t such a big deal. She then holed up in the kitchen, sending out one burnt waffle after the other. Meanwhile, in the dining room, my father grilled my boyfriend about his career intentions, his previous job history, and his left of left political leanings. I raced back and forth trying to do damage control. It was probably another decade before we had another meal together at my parents’ house.

And it didn’t go any better when I went to his house.  He had instructed his mother that I didn’t eat red meat, but she interpreted that information to mean that she could serve veal, since pink isn’t red. I so wanted to make a good first impression that I dutifully ate an oversized portion, and then tried to be as quiet as a mouse as I threw up all night in their bathroom.

Many decades later, I’ve had lots of time to reflect on the dos and don’ts of bringing new people into a family. There have been countless funny movies on the subject—from the tense Easter dinner scene in Annie Hall (where Woody Allen recoils from the dinner talk about boat basins and swap meets) to the hilarious dinner scene in Meet the Parents(where Ben Stiller talks about milking cats, and then knocks down an urn of his fiancé’s grandmother’s ashes). 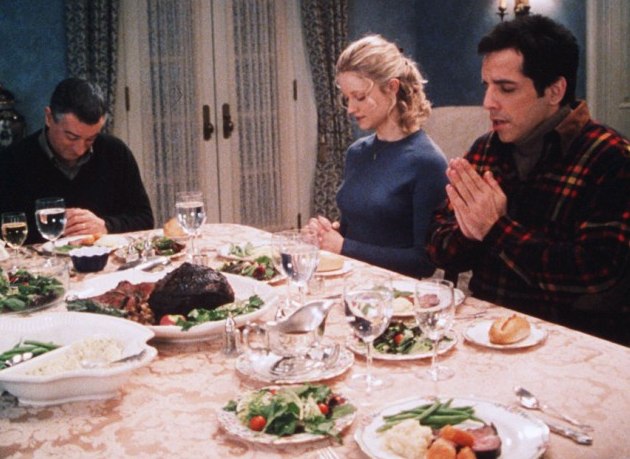 As a family therapist, I’ve tried to help many families welcome a new member whose different background, values or food preferences may at first seem insurmountable.  Here is some advice for that first family dinner when a child brings home his or her sweetheart.

What not to discuss:

In other words, best to stay away from the far past and the far future, and stick to topics in the present like:

There are many ways that your child’s guest may contribute to a happy meal, too. Bringing a small gift, like flowers or a bottle of wine, is a nice gesture. Such graciousness from a young guest is like catnip to parents. Even if the meatloaf is the driest thing you’ve ever tasted, it’s a good idea to compliment something about the food. And parents like to know that their son or daughter has told their significant other something positive about them. A question to a parent about a meaningful hobby or work activity can warm things up.

Despite my father’s cross-examination of my boyfriend, and my boyfriend’s mother almost poisoning me, we went on to marry and have many happy family dinners with our parents, and later with our children. Now, it’s our turn to host, and I’m a little nervous.

Stuck at Home With Your Partner? Look to Retirees to Make it Work
Expert Roundtable: The Psychological Benefits of Thanksgiving Dinner
'That's Disgusting!' - Encouraging Picky Eaters
Nurturing "Stewards of the Planet"