How to Make your Toddler an Adventurous Eater and Cooperative Diner

(Note: This is the second post in a series).

Young kids are not the most civilized dinner companions. Dinnertime can feel like sitting with a group of monkeys who like to throw and smear their food, and have short attention spans once they are done with eating. But, this is a critical time for developing family meals as a ritual. This is important for the parents as well as the children. Barbara Fiese, a researcher of family rituals, found that by the time kids were pre-school age, if parents found little meaning in their daily rituals, they were also less satisfied with their marriages. Also, when children are toddlers, they are more receptive to trying new foods than are children ages 4 to 8. So, the preschool years are a time of great opportunity to get a dinner ritual started and to offer your child many new foods.

Parents play a key role at this age in encouraging adventurous eating. The best strategy to prevent picky eating is for parents to model their own enjoyment of foods they are offering their kids at the dinner table. The worst strategy is for parents to pressure their kids to eat or to restrict foods. If you want your child to try new foods, you shouldn’t tell them they can’t have dessert unless they eat all their vegetables. In a 2008 study in the Journal of Nutrition Education Behavior, researchers found that when parents used rewards to encourage food tasting or dismissed a child’s expression of hunger or fullness, the children were almost twice as likely not to eat fruits and vegetables. Another common mistake is for parents to give up too easily if a child refuses a new food. Researchers reported in the American Journal of Dietetic Association that children may need 8 to 15 offerings of new foods before they decide they like the food. Of course, it is important to show some restraint when offering a new food over and over again. Perhaps the best way is to eat the new food with gusto in front of your child, and then ask, “Would you like to taste it?” Also, serving food “family style” in bowls or platters placed on the table allows children to see the adults enjoying a food that the kids can just reach out and try.

Enroll your young kids as sous-chefs 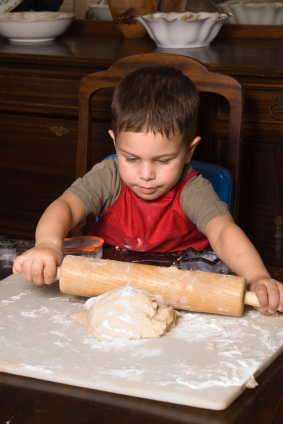 Toddlers will want to be right in the kitchen with you while you are making dinner. Sometimes, having a low cabinet with a few old pots and pans, wooden spoons and empty squeeze bottles can keep kids occupied for hours. Or putting a chair up at the sink for them to play with soap, eyedroppers, sponges and plastic buckets can also keep them busy while you prepare dinner. Or a young child may “make” a parallel meal by taking discarded vegetable scraps and mix them together alongside you.

For young children, the actual sitting down and eating dinner may be less important than the fun of helping to create it. Pre-schoolers are as interested in the journey as the destination, as invested in helping to make the meal as to eat it. When you take a walk with them, they may want to pause to look at a piece of trash or stop to pet a dog. They usually don’t march straight ahead in hopes to get to their destination as quickly as possible. So it is with mealtime. The whole process of mixing, stirring, and making a mess fascinates young children. The whirring machines in the kitchen may also be captivating. My son Joe was obsessed with kitchen machines as a toddler, running to the Kitchen Aid mixer as soon as he woke up in the morning to tell me with a gesture that he wanted to beat some eggs. We ate meringues, soufflés, and brownies at least once a day for a year.

Of course, there will be many evenings when you just want to get food on the table as quickly as possible. There may be other nights when it is relaxing to cook dinner in a quiet kitchen while your partner entertains or bathes the children somewhere else. But, one of the great joys of having toddlers is their willingness to jump in and help. Some recipes particularly lend them themselves to having your children help with the preparation. As an extra bonus, a child’s participation in the making of the meal usually guarantees that the child is invested in wanting to eat his or her creation. The young cook may even try to entice his or her siblings into trying the dish.

The main challenge at this stage of development is making a dinner that will appeal to both your young children and to grown-ups, since the last thing you want to do is make multiple meals. A few basic principles can help bridge the age span.

The Politics of Thanksgiving
Managing Food Allergies at the Dinner Table
Making the Most of Dinner with Adolescents
What is a "Family Dinner," Anyway?