What an Imperfect Dinner Moment can Hold

It had been a busy day that morphed into a busy evening. My husband wasn’t home yet and I was so tired I could have just crawled into bed even though it was only six pm. But I had not yet fed my boys, ages 7 and 9, or prepared anything for dinner, so I asked them what they wanted. 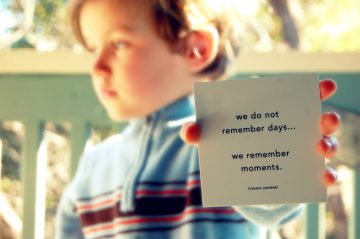 “Grilled cheese,” They both said. Easy enough. I made it and put it on the table with a drink and some carrots and figured now I’d make my own dinner. They could keep each other company, right? But one of them asked me to stay. So I sat.

“What should we play?” I asked them, trying to seem enthused. We often play games, which are good for laughs and great for keeping everyone at the table longer while also channeling their restless energy. Recent family favorites include Hangman, Telephone, Story Cubes and Two Truths and a Tall Tale. On other nights we use conversation starters, which I keep in easy reach on the table. But I had noticed lately that the conversation starters were not going so well. Most of the answers I got were silly, and involved the word “poop.” An example: What’s your favorite dinner food? “Poop lasagna.” Rather than get upset about it, I choose to keep Dr. Anne Fishel’s advice about “the good enough dinner” in mind. It’s OK to skip the manners, she says. I was brought up in a house where burping at the table was encouraged, so I’m no stickler about this kind of stuff.

So here I was on this tired evening, my expectations low and in the realm of poop. I chose a conversation starter.

“If you won the lottery, what would you do with the money?

I waited for my older son to either say “buy some poop” or “buy an Xbox,” his standard answer.

“Give it to charity,” the boy said.

In my mind, I raised one eyebrow—a feat my husband can do but I cannot. It would have been perfect at that moment. This was the same boy who had once torn up a dollar bill at an Easter party because he wanted MORE money for himself.

“What kind of charity?” I asked.

I suggested something I had been thinking about for some time. “We can start a family charity jar…instead of your personal charity jars (which I knew were not accumulating much money compared to the spending jars) and we can all put a dollar in a week or something.”

“You don’t have put that much in,” I assured him.

“I think a dollar per week per person is good, yes?”

I looked at my seven-year-old who remained in his seat and said, “All I have are fives.”

A developmental difference perhaps? As a child I think I was a do-gooder around the age of nine/ten, before my jaded adolescence. While I will take some credit for influencing my older son’s recent charitable nature, I imagine cognitive and emotional development play big roles as well.

So now, after sitting down to dinner for five minutes, we had a family charity jar.

Then I chose another conversation starter. “What does courage mean?”

I said yes, that’s part of it. “To keep trying…to be brave.”

Then I asked the second part of the question. “Who is the bravest person you know?”

I waited for the poop answer…here it comes…

“Because you had cancer and you had to do a lot to get better.”

My older son, usually a daddy’s boy, voted me bravest as well.

I was stunned. And enormously touched.

Author Abigail Thomas has a lovely little memoir called Safekeeping. Every chapter in it is very brief – some even only one paragraph. It was the ideal book to read when my children were young and my mind was very scattered (It’s still scattered, but even more so then). The last chapter of the book is a powerful essay about the time she and her daughter gave her newborn grandchild her first bath. She calls it “What a Moment can Hold.”

Yes, one could argue that this moment with my boys could have happened any time, anywhere. But it happened at dinner, and I can’t help but think that had I not made the effort that day, at that very moment, I might have missed it completely.