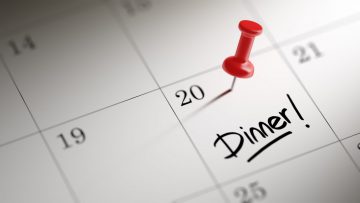 One of the things we love most about our work is hearing from families who have experienced real, positive changes in their lives due to having more frequent family dinners. This month’s family, the Zhangs, are a great example. Mom Xiaohong was referred to The Family Dinner Project after our trip to West Virginia last spring, and she and her family have logged nearly 40 dinners together in the past few months using our Dinner Tonight tracker — an accomplishment which has led to lots of benefits for the whole family.

To help the whole family improve their health and lose weight. The Zhangs were referred to TFDP by the CAMC Weight Loss Program.

All three kids have a number of activities, so gathering everyone for regular family meals at a reasonable hour is difficult. Xiaohong says that getting dinner on the table by 7 p.m. is a rarity, but something they’re trying to commit to at least a few days a week. In addition, the kids are somewhat resistant to certain healthier options, like fish and seafood, which has been a challenge in creating varied menus to help with the family’s weight loss goals.

To stick to their healthy eating goals, the Zhangs have scheduled sit-down dinners together 3 days a week and committed to some easy substitutions for favorite foods. They also make sure to eat breakfast together almost every day of the week. Xiaohong offers the following tips that have helped her and her children ease into the new routine:

“Cook something everybody likes. We’ve changed to brown rice and whole wheat noodles, controlled the quantity, and added more vegetables in our meals. I also sometimes make tofu as a substitute for meat.”

Try some of Xiaohong’s tips with this Veggie Noodle Stir Fry recipe!

Despite the challenges in making healthy meals that appeal to everyone, the Zhangs enjoy a variety of nutritious foods at dinner. Dumplings are a favorite, along with fresh produce like tomatoes, cucumbers, cauliflower and smoothies made with fresh fruit. Xiaohong also says she’s working on the kids’ aversion to fish by making sure to offer it at least once a week, using preferred options like smoked salmon and shrimp whenever possible.

Give the Zhangs’ family favorite a try — check out our Origami Dumplings!

Xiaohong says that subscribing to Dinner Tonight and using our subscriber-only tools, such as the dinner tracker, has been helpful in keeping her family on track. “Checking the calendar helps me keep up on the goal, eat together more and eat healthy more often. It motivates me to cook something the kids all like.” She also says she tries to share news and ideas from the TFDP site with her children at the dinner table to keep everyone invested in family dinners.

The Zhangs say that having family time together is the best part of their new routine, but there’s an added bonus: Since starting to track their family dinners with TFDP just a few months ago, one of the children has already lost 15 pounds — a big milestone for the family to celebrate together at the table!

Connecting School and Home for Better Family Dinners
The Bank Robber's Dilemma
Veggie Skeleton is the Life of the Party
Family Picnic #11: Caesar Salad and Acts of Kindness