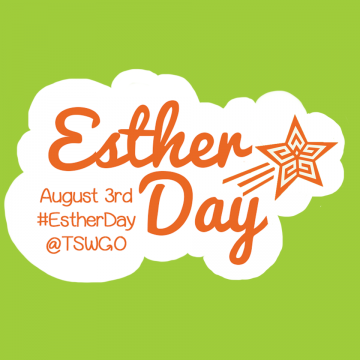 We’re pleased to introduce our special friends the Earls! Lori and Wayne are the parents of famed “nerdfighter” Esther Earl, who was the inspiration for the character of Hazel in John Green’s novel “The Fault in our Stars.” They, along with Esther’s surviving brothers and sisters, have built a foundation around Esther’s legacy and celebrate her life each August 3rd with Esther Day, an “alternative Valentine’s Day” dedicated to spreading love through everyday acts.

Lori and Wayne Earl of Quincy, MA; children Graham, 21, and Abe, 13, both of whom live at home; and adult daughters Abby, 28, and Evangeline, 25. Daughter Esther would have been 23 this August 3rd.

Lori recalls growing up in a household where family dinners, and even family breakfasts, were the norm. She says that even now when she visits her parents, who are in their 70s, a proper breakfast eaten together — “with those little pitchers of warmed up syrup, cups of hot tea, stuff that memories are made of” is a must.

As life has gotten busier, she now says she thinks the key for her own family is in just stopping to recognize the value of a meal eaten together, even if it’s just with one other person and not the whole tribe. Lori and Wayne try to take at least one of the kids out for a special meal once a week and spend the time focusing on connecting with one another.

“Life happens,” Lori says. “And as the children have grown, family dinners have become more sporadic, and much of the time it’s just the two of us. The schedules of our two boys still at home, as well as our work schedules, have made family meals more challenging. We’ve lowered our expectations, but we still long for those family dinners.” When the children were younger, Lori and Wayne recall having frequent family dinners, sometimes leading to movie nights or game nights together, or watching the kids ride bikes outside their home. Capturing some of the magic of that ritual when not everyone still lives at home, and grown children have their own lives, is difficult.

The Earls are learning to find a new type of family dinner ritual, incorporating guests, holidays and time spent together when they visit their children in their homes, or vice versa. They may not be daily dinners together, but Lori and Wayne find these to be special times when they can cement the bonds that were created in their original dinner routines long ago. Wayne might even ask everyone to go around the table and answer a particular question — the kids might roll their eyes, Lori says, but everyone participates!

“We recently visited our eldest daughter in her new home in California,” the Earls recall. “It was so ordinary — yet extraordinary! We shared a delicious meal she cooked, and sat around the table together and talked. We missed Esther, and Evangeline was back in New England, but with Abby’s new blended family and part of ours, it was community.”

These days, the Earl clan looks most forward to the holiday favorites and special food rituals throughout the year: turkey for Thanksgiving, ham at Christmas, Raclette for Graham’s birthday. But, Lori says, they can also throw together a simple meal of tacos or curried lentils, and appreciate it all the more because they’re eating it with someone else!

Lori says “The Family Dinner Project reminded me of something that we used to practice better than we do now — and I really appreciate the reminder! I don’t think any of us should feel guilty if family dinners have become something of a lost art; I think that we should set a realistic goal, work towards it and celebrate our success!”

Daughters Abby and Evangeline both agree on the value of family dinners: Abby says it’s coming together to share your experiences at the end of the day, and Evangeline enjoys spending time together and catching up, with a chance to ask everyone else how the day has gone.

A Note from the Earl Family and their Foundation, This Star Won’t Go Out:

This Star Won’t Go Out invites you to participate via social media in highlighting this day of love–the “non-romantic Valentine’s Day,” as it were!

Created in collaboration between author John Green and teen Esther, #EstherDay celebrates the love of friends and family, and is especially a day to say “I love you” to the people we so often don’t take the time to say it to–the very people that mean the most to us. This day has grown to have a big audience–but we think it’s an important enough idea that we’d like to see #EstherDay spread worldwide!

Always, but especially at this time in our world, we can all use a bit more love.