I grew up in the San Francisco Bay Area, a paradise for food and dining.  Wild and crazy taste treats were a part of my everyday life and, by the time I entered my early teens, I had developed a taste for every kind of Asian cuisine, I could guzzle hot salsas with the best of them, and I knew my away around most European menus.  I could eat spicy foods, curried foods and pickled foods, and every menu, potluck and block party offered another chance to learn about a new food.

Then I grew up and had children and learned about “white food kids,” or kids who would eat only the whitest of white foods: plain pasta, white rice, white breads, and maybe, if you were lucky, chicken nuggets.  I was determined that my little angels wouldn’t become “picky poodles,” and I watched with pride while they gobbled up baby squash and baby curried carrots and even their baby zucchini-and-broccoli-medley.

And then they turned into toddlers.

They started throwing their strained/pureed/all organic treats on the floor, hollering for their white pasta, and pulling the brown grains out of the rice pilaf.

This is one of those parenting situations where you choose your battles.  I’ve seen more than my share of “white food kids” end up eating everything on their plate during their voracious teens, and the pickiest of third graders get a lot less picky when they’re 23 and on their third month in the Peace Corps in Gambia. Then even candied crickets look fine.  So it may well be that you don’t need to do a thing.

But I really wanted to eat out with my kids, and I wanted to be sautéing chicken breasts in interesting sauces and taste combinations, not just sticking to oregano and salt.  So I took action. Here are a few ways I got them off their white-food-and-bland-gravy train:

Every time the kids tried a new food, we grabbed a marker and heralded the day, writing Tuesday, March 13, Cooper tries pad thai! on our Captain Food Explorer chart (which I created) hanging on the kitchen wall. I’d ask the kids to rate the food and put stars next to the entry (one star for icky and five stars for sublime).  When out to eat, same thing:  “Look!  Kenzie’s being a Food Explorer, ordering chicken curry!”  I tried to convey an expectation that foods were meant to be explored, that everybody’s palate varied, that nobody liked everything but that every meal had the potential to include a new five-star food. 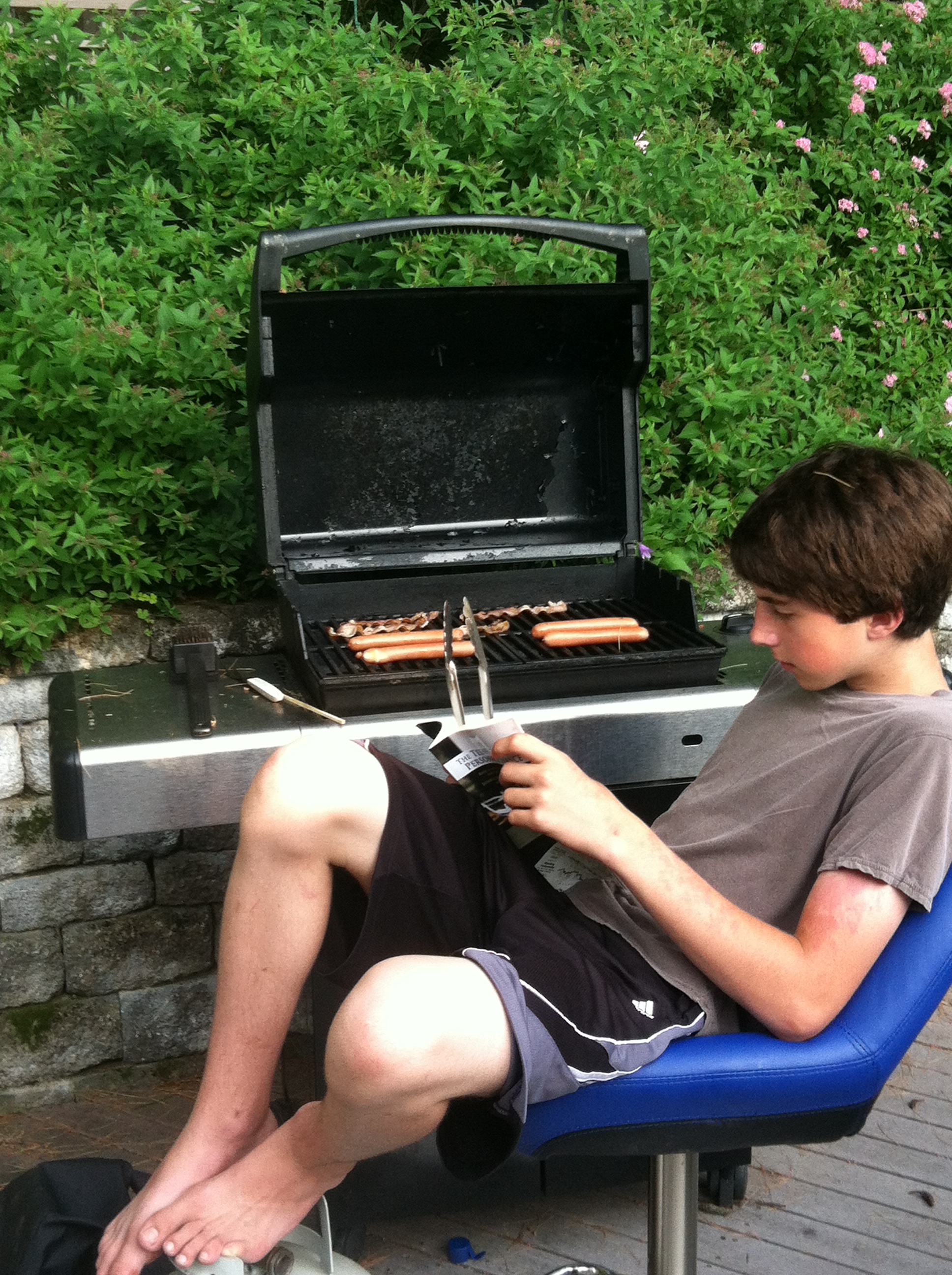 We were lucky enough to have a sensational spice store, Penzeys, move into our town when my children were small.  Lucky, because not only does Penzeys sell fabulous spices, they have large jars of each spice available for sampling.  But how do you sample an herb or a spice?  By smell, of course.   So every few months, I would take my kids into the store and let them smell the spices–every single jar in the place sometimes. At each visit they were allowed to buy one small jar, which was then theirs for as long as it lasted.  That spice would be trotted out for everything: eggs, hamburgers, even mac and cheese. This way, their palate expanded just a bit.   (If you (tragically) live in a town without Penzeys, you can always try an Indian or Asian sub-specialty store, or order through their website.

Like most households, our kitchen is the center of our universe.  The kids grew up watching me cook, and gradually I taught them the things that interested them.  At first my boys only wanted to make dishes that involved power tools: mixers and blenders and noisy items with plugs (with extra points for anything requiring safety goggles!).  Typical of many kids, their early interests centered on baking, with its immediate gratification.  But they quickly moved into sauces and flavor mixing so that even making Ramen noodles on exhausted winter nights became an adventure – what flavors could you add, what vegetables could you mix in? 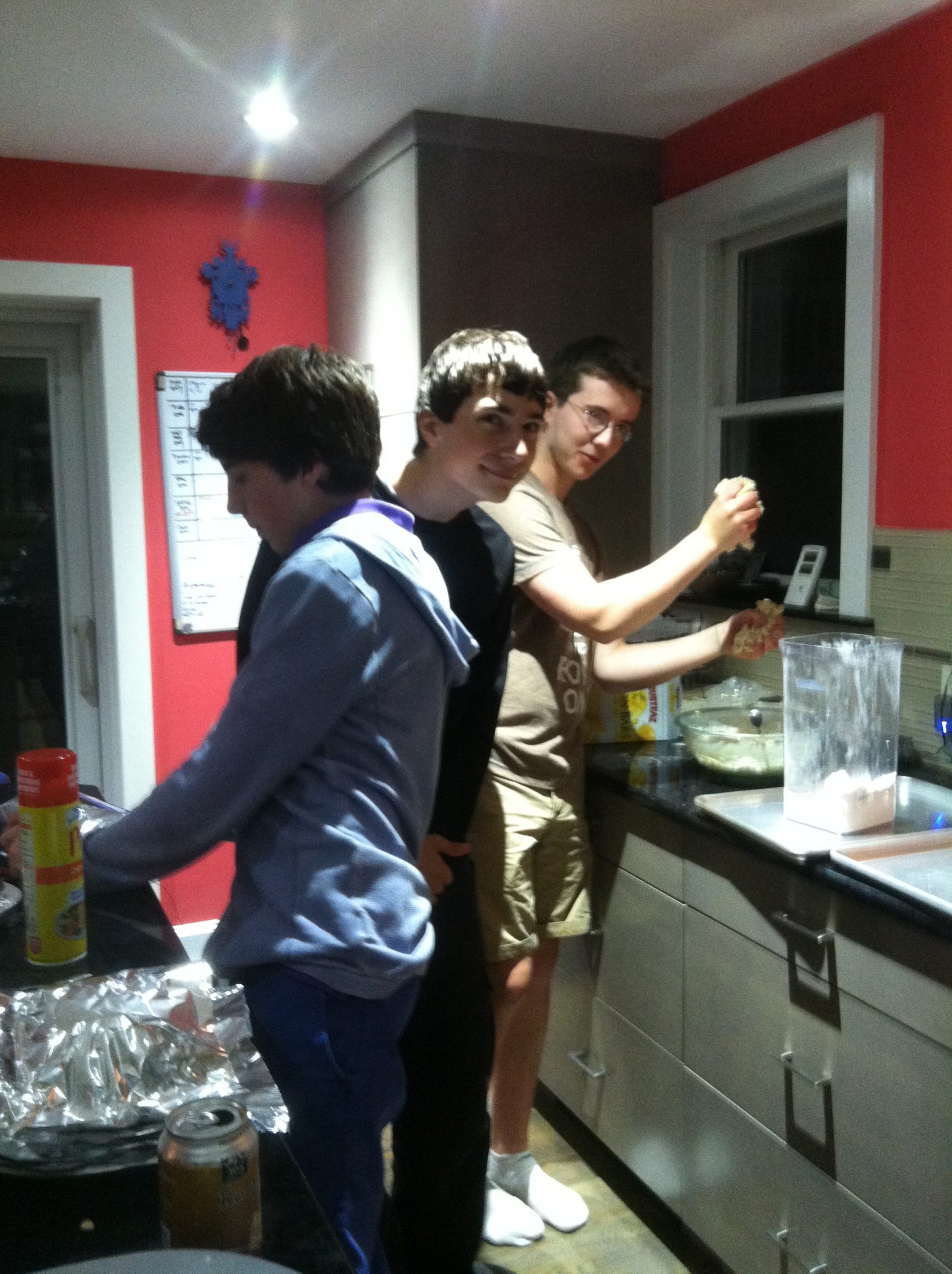 If nurturing a love of food in your children is important to you, find ways to prioritize it. I arranged cooking birthday parties and play dates where we cooked and, on vacation sometimes, we ate super cheap until the last night when we splurged on a fancy restaurant so they could see the peak moment of a Brussels sprout.  And eventually, in middle school, I enrolled them in teen cooking classes. That’s made a huge difference; They get to explore new foods (tomatillos!), they learn to prepare new ingredients (artichokes!), and they get to eat brand new combinations we never did at home all in the company of their peers.

Now don’t let us fool you:  we’re not all “Master Chef” all the time.  We have breakfast for dinner on a regular basis, and my kids still have food preferences that rule our menu choices (still no olives, sigh).  But one line item on my Parental Mission Statement has been fulfilled:  I gave my kids a cooking springboard, a culinary baseline from which to operate.  They can run kitchen power tools without eye protection any more, which is huge, and they’re way beyond white foods.  And sometimes, oh, blessings, they cook whole meals for me!