How My Kids Learned Grit From a Dinner Disaster 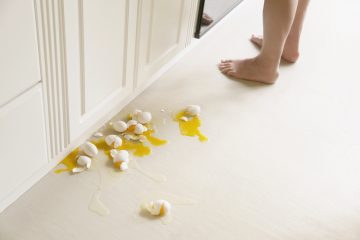 Last February, during a week off from school, my two sons decided they were going to cook dinner together. At the time, they were 8 and 11 years old, with varying degrees of both experience and confidence in the kitchen, and my belief in their ability to actually work together as a team on anything without turning the experience into a wrestling match was what you might call shaky at best. But I didn’t mention any of my misgivings to the boys. Instead, I let them choose a few recipes from the supposedly kid-friendly cookbook they’d found, showed them how to use the recipes to write an accurate grocery list, and brought them with me to the grocery store, where they flailed around for a while trying to find everything they needed. I did my best to retreat to the cafe area at the front of the store, resisting the urge to rescue them.

That evening, they banished me and my husband from the kitchen and surrounded themselves with their ingredients, insisting that they could handle whatever came up and that under no circumstances did they want adult help. As we sat in the living room, I channeled my nervousness about what was happening on the other side of the wall by jotting down some of the hilarious (and unsettling) things I heard:

8-year-old: “You have to take the stickers off the tomatoes before you cook them!”

8-year-old: “Find a large pot. Okay. They need to be more specific. How large a pot are we talking here?”

They began their cooking experiment at 4:50 p.m. The journal I kept of that evening shows that when I had to leave the house at 6:37 for a prior commitment, my younger son was furiously stirring the “large pot” and muttering “Oh crap” under his breath (apologies to those for whom that language is offensive; this is the raw, unedited reality!), and my elder was wandering around the kitchen holding three large, peeled potatoes with no apparent idea what to do next. You might say the whole adventure was a huge failure, a waste of food and resources, and a gigantic disappointment for my kids.

I prefer to say that it was an epic adventure, a treasure trove of hilarious memories, and a fabulous learning experience that went a long way towards teaching them both about that hotly desired character trait: Grit.

They may not have learned to cook a truly edible meal that night (though they and their Dad did actually eat whatever finally came out of the kitchen at 8 p.m., and talked about their impressions of the food and what had gone wrong with each dish). They may not have learned how to reliably work together, although to their credit there was no wrestling that evening and they did stick it out as a team. But because we stepped back and supported their vision, knowing — even expecting — that they would probably “fail hard,” my elementary schoolers had the experience of planning a meal, writing a shopping list, buying their ingredients and trying their best to provide dinner for the family without any well-meaning adults hovering over the scene to “direct” things.

Better yet, the experience didn’t sour them on trying again. They did admit that they weren’t quite as ready to tackle a full meal as they thought, but both of the kids have asked to help in the kitchen more since that night, each has mastered independently cooking a few simple items, and they’ve taken over full responsibilities for kitchen clean-up once a week in addition to their other household chores.

You don’t have to hand the kitchen over to your kids for quite such an ambitious project in order to teach grit and perseverance in your own home. But you can use family dinner in multiple (less messy) ways to help build the “grit muscle.” Here are some ideas:

Each time you turn kids loose to tackle these, and other, tasks on their own, they’re learning how to approach a new skill and learn from their mistakes to eventually gain mastery. In other words, nerve-wracking though it may be for parents who would really just like the task to be done well and quickly, letting them repeatedly try, fail, and try again without too much intervention teaches them to persevere. Just remember that for the learning to happen, criticism and impatience have to stay off the menu…even when it’s 8 p.m. and there’s a cup and a half of chili powder in your meal.