A Slam-Dunk for Women 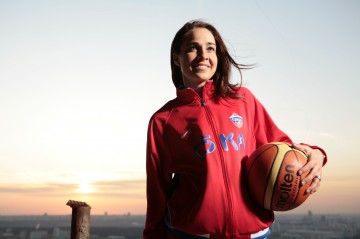 Last week, the San Antonio Spurs hired Becky Hammon as an assistant coach for the upcoming season. Although she’s played professional basketball in the WNBA, many people were surprised by the Spurs’ choice to hire Hammon; she’s the first woman to ever hold a full-time, paid coaching job in the NBA.

Read the full story and then use these questions to start a discussion with your family:

Have you ever been the first person to accomplish something?  What was it?  How did it feel to be the first?

Throughout history, there have been a number of people who were the “first” to do certain things. Can you think of some famous examples?

Have you ever heard somebody say that there are things that boys or girls can’t do?  What kinds of things did they mean?  What do you think about that?
For ages 10 and up:

Why do you think it has taken such a long time for the NBA to hire a woman as a coach?

In the story, Becky Hammon says that the Spurs coach, Gregg Popovich, told her: “It just so happens you’re a woman.”  What do you think he might have meant?

Even though women like Becky Hammon have come a long way in breaking down gender barriers, there are still some ways in which women are treated differently from men in our culture and around the world.  Can you think of some examples?  Where do you think these ideas and attitudes come from, and what do you think it would take to change them for good?

Snow Job Risks No Job
Pandemic 2020: Our Stuck at Home Guide to Food, Fun and Conversation
Talking About: Resilience
Ways to Honor MLK Day as a Family