Sign of the Times: What’s a Parent to Do? 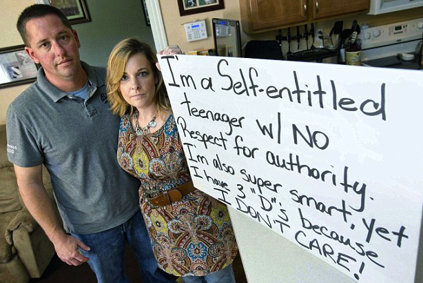 Gentry and Renee Nickell weren’t getting through to their 13-year-old daughter. She was slacking off and not showing respect. So they took their gripes public. Or more precisely, they made their daughter take them public. As you can see and read here, the girl was made to stand on a street corner for 90 minutes holding a sign that detailed her ‘sins.’

There were some unintended consequences. Someone called police. Passing motorists snapped photos with their cellphones and posted pictures on the internet. And the next thing the parents knew, their story was getting lots of media attention. Unfortunately, this is not the first instance of public shaming as punishment by parents in the recent past. The question is: should it be the last? Here are some questions for discussion with older children to get the conversation started.

Was there a lesson learned here?  If so, what was it and who learned it—the parents or their daughter?

The author of the article suggests that humiliation or shaming is bullying behavior. Do you agree? Did the Nickells bully their daughter or only punish her? Can you explain the difference?

If you were Gentry or Renee Nickell, what else might you have tried with your daughter?

The Nickells claim that their daughter’s behavior has improved.  Do you think that will last? Why or why not?