A Player with Bite 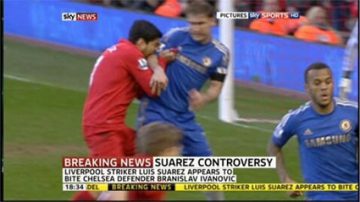 Luis Suarez, a Uruguayan “footballer” is famous for more than just his soccer skills lately. Last week he made headlines after allegedly biting Giorgio Chiellini, an Italian opponent, during a World Cup game—an allegation that he originally denied. Now, according to this Guardian article, Suarez has apologized for the incident and has been praised as “humble” for his admission by Barcelona sporting director Andoni Zubizarreta.

Read the story and use the conversation starters that follow to strike up a conversation:

Is it ever OK to intentionally hurt someone during a sporting game?

Have you ever been unjustly attacked by someone while playing a sport—or have you ever felt so angry during a game that you acted out, or wanted to act out, like Suarez?

What does the word “humble” mean to you? Do you think Suarez is “humble” because he apologized?

Does it make a difference that Suarez originally denied the allegations about biting the other player? Or do you believe people should be forgiven no matter how long after the offense one apologizes?

What is something you have had to apologize for? Was it easy or hard for you to do?

Suarez was banned from soccer for four months. Do you think this was a fair “sentence?” Do you think his punishment would be different if he wasn’t such a good soccer player?