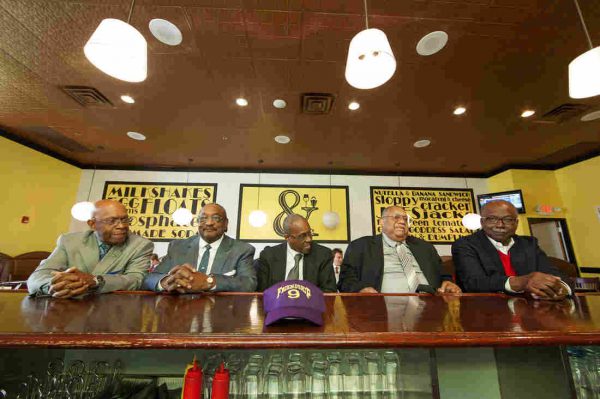 In the spring of 1961, a group of students from Friendship College were arrested after refusing to pay a fine for staging a sit-in at McCrory’s all-white Five and Dime in Rock Hill, South Carolina. The nine young black men, known as The Friendship 9, served 30 days of hard labor in a prison camp.

Last week, on Wednesday January 28th, a Rock Hill judge dismissed fully their charges, clearing their names— but not the wrong committed against them—and apologized on behalf of the state for the way they were treated 54 years ago. Read this amazing story of justice finally served, or listen to this audio coverage of the news. Then choose from our conversation starters below to help you spark a meaningful discussion:

Have you ever stood up for something you strongly believed in at the risk of being punished? What was it? What did you do?

The Friendship 9 were prohibited from sitting at the lunch counter because their skin was black. Have you ever been told you couldn’t do something because of the way you looked or acted? What happened?

Talk about a time you acted bravely, alone or with friends.

Has there ever been a time when you wanted to act bravely, but didn’t?  What prevented you?  What might help you to act differently next time?

In the news coverage, John Hayes, the nephew of the judge who originally sentenced the men, says “we cannot rewrite history, but we can right history.” What do you think he means? Talk about a time you “righted a wrong.”

In the story, an apology is issued on behalf of the entire state of South Carolina. Do you think it’s difficult to apologize? Why or why not?

What do you think makes for a good apology?

Think of a time when someone apologized to you for something. What happened and how did you feel after?

The Christian Science Monitor article notes that two white men who taunted the Friendship 9 in 1961 asked them for forgiveness in 2009. Have you ever felt bad about taunting someone?

Why might the wronged men choose to give forgiveness? Are there reasons why not?

Do you think this action represent a larger trend toward positive race relations in the United States? Why or why not?

conversation of the week justice