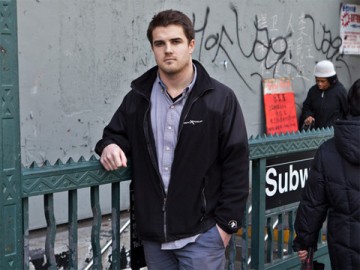 Someone once said, “A true hero does what needs to be done and needs no other reason.”

On a New York City subway car recently, a man did what needed doing. He stepped between a man and woman who had begun kicking and punching each other. He didn’t say anything. He didn’t even try. In fact, he ate potato chips while carrying out his particular form of heroism. Maybe it was just the sight of him calmly continuing to eat that helped defuse the situation. And thus was born, “Snackman.”

Another subway passenger caught it all on video, and it became an internet sensation.

Snackman’s real name is Charles Sonder. He’s a mild-mannered 24-year-old architect who chose to be an upstander rather than a bystander.

Sign of the Times: What's a Parent to Do?
An Extra Tricky Extra Credit Question
A Flag's Fate
Champ or Chump?