Like so many parents, I want my two boys to be kind. I want them to understand how lucky they are. I want them to want to give to others less fortunate than themselves, and to experience the joy that comes with such charitable actions. I naively thought that this would just sort of happen—either via genetic makeup, or via osmosis. Mom likes to give = kids like to give, right? Ah…not quite. 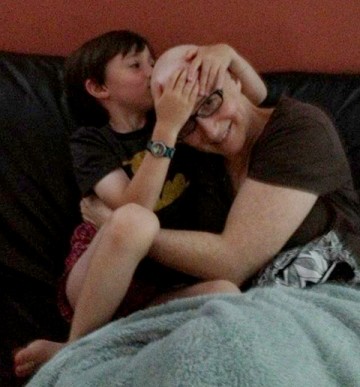 The first time I volunteered, I was a 22-year-old recent college graduate. Feeling over-privileged and searching for a meaningful life beyond booze and boys, I did not join a cult but rather signed up to deliver a meal to an elderly stranger. I can’t remember what the woman looked like, but I do remember feeling nervous while talking with her in a cramped kitchen with one dim light over a round table. I remember offering to shop for her, returning with overflowing bags from the grocery store.  I remember leaving her apartment and feeling joyful, a humanity induced-high that was, and remains, hard to put into words.

After that experience, I couldn’t get enough of volunteering. For years I spent Christmas day and Easter visiting with elders who were alone on the holidays. I did the same for Holocaust survivors around the Jewish holidays. I participated in a Team in Training century ride for The Leukemia Society, and donated to the food bank. I was hooked on giving.

Now fast forward to the birth of my two sons, Ethan (now 7), and Jonas (6). I quickly discovered that the giving spirit, while not completely absent, was not something ingrained from birth.  So I tried to engage them in giving activities whenever possible. For instance, every year our whole family does a walk for ovarian cancer awareness in honor of my mother, the grandmother they never met. Occasionally I also ask them to pack up old toys and clothes with me so we can donate them to Cradles to Crayons.

Unfortunately, the connection from these activities to the values I hope to inspire in them is shaky. Depending on the day, my boys may give willingly to “children who have no toys” or may scream and cry in protest, suddenly coveting the toys they haven’t played with in years. As for the Ovarian Cancer walk, I suspect that the free food and raffle prizes are what resonates most with them. Still, I hold out hope that something about these feeble-feeling attempts will plant a positive message in their tender psyches, the way my father’s box of canned goods for donation was planted in mine.

This year, however, any charitable brainwashing plans I had for my kids were abruptly interrupted by a breast cancer diagnosis. At 44-years-old, I underwent surgery, chemotherapy and radiation—one after the other—as my boys looked on, sometimes asking questions, other times simply rubbing and kissing my bald head and, most of the time, just being little boys.

As wise friends and doctors advised me not to take on too much during this time, I postponed some new parenting to-do’s I wanted to implement, like allowance. A friend gave me the idea of using three jars for allowance: one for spending, one for saving and one for giving. In September, when I was feeling better, I went to the art store to buy jars that my kids could decorate.

“So you’ll each get six dollars,” I said, proudly sharing with them their new piggy banks. “And you put two in spending, two in savings and two in giving.”

“What? I don’t want to give my money away,” Ethan, my older son, said angrily.

“You’ll still have other money you can save and spend,” I assured him. “And we can pick charities you guys like, maybe ones that help animals? Or kids?”

“Animals!” Jonas shouted. “I want to help the animals.”

Ethan, however, erupted into tears, shouting, “That’s not fair! I’m not giving my money away.”

I stared at him, pained by his coldness, as though it were a reflection of my bad parenting and that I had birthed a monster, forgetting for the moment that he was only seven.

“Well, what if it was a breast cancer charity?” I asked, a question that emerged like a reflex and left me feeling vulnerable.

But something clicked. The expression on Ethan’s face softened. “OK,” he said.

Coming home from his afterschool program last week, Ethan proudly told me he’d made bracelets that would be sold to raise money for breast cancer research. Another win.

I’m not saying getting cancer is the way to invoke the giving spirit in your kids. I wouldn’t wish that on anyone. I think, though, there is something about making it personal. About bringing the concept of giving “home” in some way, for some kids.