Comforting the Sick: What Dinner Do You Want When You’re Under the Weather?

Although I make a mean chicken soup, my sons asked for sushi accompanied by a vanilla milkshake, or eggs with toast whenever they were under the weather. Maybe this should have been a sign that they weren’t all that sick, but it made me wonder where the cravings come from for certain “invalid foods”. Invalid foods are those we want when we have a cold, a fever or a stomach ache and are different from “comfort foods” — the warm, fatty, familiar concoctions of our childhood, like chocolate pudding or macaroni and cheese.

Are there medical underpinnings to foods we eat when we are sick that might explain why some foods are universally regarded as curative? As E.N. Anderson, a Professor of Anthropology at the University of California at Riverside and the author of Everyone Eats: Understanding Food and Culture, told me: “I have been all over the world and never yet found a place where chicken soup wasn’t a classic invalid food.” Cysteine is an amino acid that is released by cooked chicken and has similar properties to a bronchitis drug, acetylcysteine, so there may be a real medical explanation for craving your mother’s chicken soup. 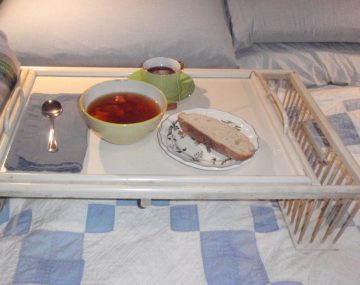 Over the years, I have been asking people from other countries what they ate when they were sick as children. Here’s what they told me:
• Sejal, a psychiatrist from India, told me she ate rice flour blended in a grinder, cooked in water and mixed with yoghurt into a porridge consistency.
• A Chinese journalist remembered that she ate “jook”—a soup made with chicken stock and a piece of ginger root, boiled with rice until it is broken down and the consistency of a watery porridge.
• Aspasia, a journalist from Greece, ate angel hair pasta soup, accompanied by small pieces of boiled chicken, with a lot of lemon juice.
• Bibi, a student from Kuwait, told me that she ate plain chicken broth with small pieces of chicken.
• Khyati, a child psychiatrist from India, ate “khichdi”—a mixture of rice and mung dai, a form of green lentils pressure-cooked with a little bit of salt and turmeric. Then, this was paired with buttermilk and the whole thing was a pale yellow.

Many of these invalid foods are carbohydrates – which are the building blocks for serotonin and for the foods that people with atypical depression often crave. Maybe sushi, porridge, noodle soup and angel pasta soup are invalid foods because of their common carbohydrate base.

Several people in my survey quoted the popular English belief, “Feed a cold, starve a fever,” and there may be some scientific basis to this idea. In a small 2002 study, Dutch scientists found that eating a meal raises the immune response required for destroying viruses responsible for colds, while fasting stimulates the response that fights bacterial infections that often underlie fevers.

A lot of invalid foods include the generous use of spices, particularly when someone has a cold or fever. One college student from Nigeria told me that his mother made him a pepper soup when he had a bad cold — a super spicy brown soup loaded with chicken, veggies and plantain. Capsaicin, a natural compound in peppers can help thin mucous and clear stuffy noses. Salt, almost always used to flavor chicken soup, also helps to thin mucous. Another young man from Jordan remembered eating lots of onions, fresh mint and radishes, along with a drink made with fresh ginger, lemon and honey.

According to Jennifer Billing and Paul Sherman who looked at almost 100 cookbooks from 36 countries, certain spices serve an antibacterial function. Garlic, onion, allspice and oregano inhibit every bacterium they have been tested on. And some spices and flavorings are more powerful when paired with others. For example, lemon and lime juice act synergistically to enhance the antibacterial effects of other spices. Other spices like garlic, ginger, cinnamon and chilies have for centuries been used to attack pneumonia, high blood pressure and nausea.

What do you want when you’re sick? Do you gravitate towards the foods your parents gave you when you had a fever or a cold? Or do you find yourself craving a food that has nothing to do with your cultural background but that may have universal medicinal properties like chicken soup, or a spicy soup? Or, do you find that comfort foods, like a vanilla milkshake, have their own curative powers?

Billing, J. and Sherman, P. Antimicrobial functions of spices: Why some like it hot. Quarterly Review of Biology, March 1998, 3-49.