Want Your Kids to Be Better Readers? Have Dinner Together

As a young child, I loved to imagine myself as a pioneer girl in Little House in the Big Woods, eating fresh snow drizzled with maple syrup. I even pestered my mother to make the treat with the dirty snow that fell on our Manhattan sidewalk. (Didn’t happen.)

Food features prominently in many books, from early childhood favorites to bestselling novels. It’s natural to want to imitate some of the meals and food traditions in the stories we read — and there are many good reasons to do so. Happily, there are many easier ways to bring together food and reading than eating dirty snow.

For starters, there’s the linguistic pairing of reading and eating, seen in such common expressions as «devouring a good book» or being a «voracious» reader. But more fundamentally, kids who have regular family dinners have a real leg up on being good and early readers.

That’s because dinner conversation is a terrific vocabulary booster for young kids — even better than reading aloud to them. When a parent talks about her day or tells a funny family story, she usually includes many words that the young child hasn’t yet learned but can understand from the context of the story. When kids have bigger vocabularies, they learn to read more easily.

While just getting everyone together for family dinner does build literacy skills, there are additional ways to inspire more reading at the table — no pop quizzes or grammar lessons required! 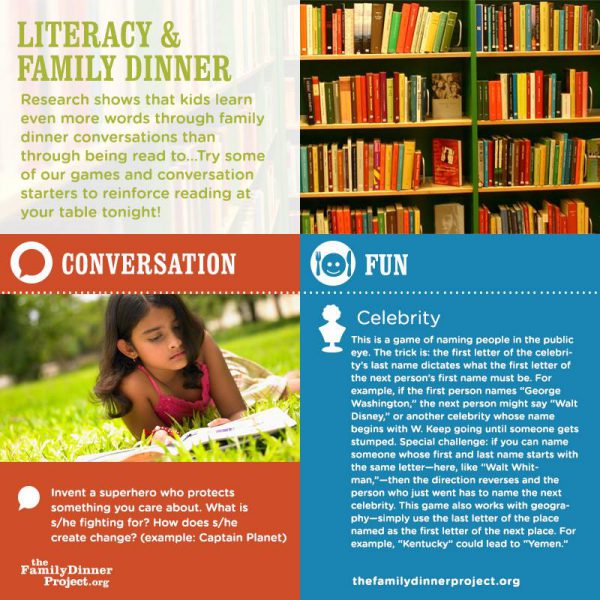 The benefits to kids don’t just come from listening to stories. Kids who know how to tell stories are also better readers. In one large study, kindergarteners who were able to tell stories grew up to be fourth-graders and even seventh-graders with higher reading comprehension than those kindergarteners who lacked narrative skills. Dinner is a prime time for kids to tell stories and to be encouraged to tell better stories. Researchers have found that kids can be taught to tell better stories with a few simple prompts:

In one study, kids who were given these instructions had bigger vocabularies and told more complex stories a year later.

There are also other, tastier connections between food and books. Consider all the children’s books that feature food as a central force in the action. There are the magical noodles in Strega Nona, the pomegranate that lures Persephone to Hades, the irresistible Turkish Delight in The Lion, the Witch and the Wardrobe, and that whimsical tribute to picky eaters, Green Eggs and Ham.

Try recreating a favorite literary meal for dinner, and then read that book (or a portion of it) aloud. Split pea soup from George and Martha or spaghetti and meatballs from Cloudy with a Chance of Meatballs are two possibilities. And don’t forget the many nursery rhymes that involve porridge, rice pudding, and blackbird pie (to name just a few). It could be fun to imagine what Harry Potter’s feasts at Hogwarts are like, or to create a high tea that Mary Poppins might like.

And of course, it’s not just children’s literature that gets our mouths watering. Melville devotes a chapter to clam chowder in Moby Dick, and in Nora Ephron’s Heartburn, the philandering husband gets his comeuppance with a key lime pie in the face. 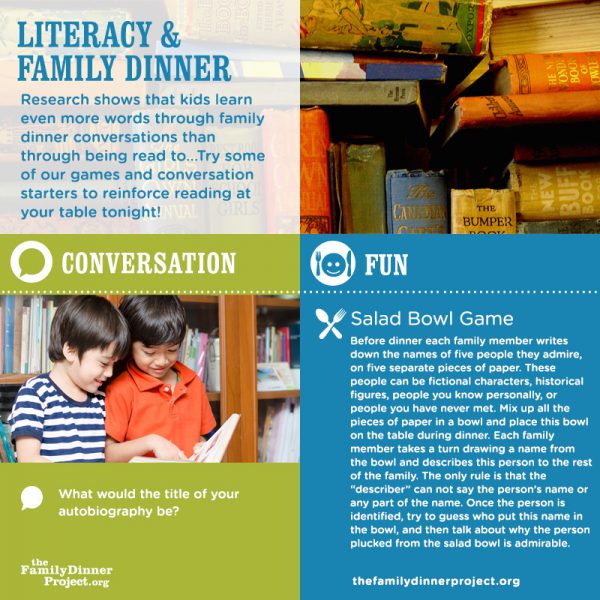 Have Conversations about Books

On slips of paper, try writing each of these questions and placing them in a jar in the middle of the table. Then each family member can pick out a question, answer it, or try another one.

Each participant writes down the names of five characters from books, on separate slips of paper. Mix up all the pieces of paper in a bowl and place it on the table during dinner.

As the meal unfolds, each participant takes a turn drawing a name from the bowl and describes the person t0 the group. The only rule is that the describer cannot say the character’s name or any part of the name. The rest of the group has to try to guess what character is being described. Once the person has been guessed correctly, try to guess which dinner guest put the name in the bowl!

Whether you make a literary dish, talk about books, tell stories at the table or play a literary game, you’ll be encouraging your kids to read. And if it’s just a tired weekday night and all you can muster is eggs and toast, remember that merely having dinner and talking at the table can, all by itself, help your kids to become better readers.

A version of this article originally appeared on The Conversation.