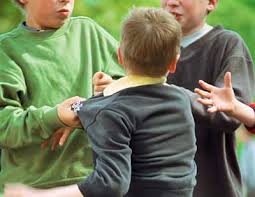 Schoolyard fights are probably as old as schools, but that doesn’t make them OK.  As this tragic story goes, a Pennsylvania boy didn’t want to fight, but that didn’t stop two of his classmates from beating him up and, ultimately, killing him.

Just one day after his 12th birthday, Bailey O’Neill was taken off life support and died. The two boys who allegedly picked on him were briefly suspended from school. The district attorney will decide if they should be charged.

This painful tale of a schoolyard fight gone horribly wrong offers us an opportunity to talk with children about bullying, courage and bearing responsibility for our actions.

1.  Even if their intention was not to kill Bailey, do you think these  boys should face criminal  charges?  If not, what would be an appropriate punishment?

2.  If you  saw two kids picking on a third, would you intervene?

3.  What do you think would be a good way to defuse or calm such a situation?

4.  If some other children witnessed this incident and did nothing, should they bear any responsibility?

Where Kindness is King
Bang Bang! You're Suspended.
Hey, Who Changed my Shirt?
Football or Footbrawl?