A Slice of Kindness 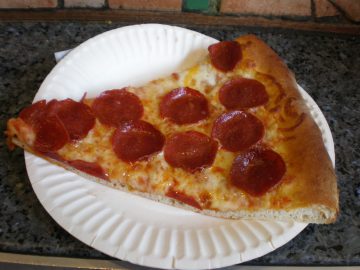 The Family Dinner Project has been talking a lot about #familydinnerforward, but we were surprised and excited to see a wonderful example of it in action at a Philadelphia pizza shop!

Mason Wartman owns Rosa’s Fresh Pizza, where customers make a habit of paying a dollar extra for their slices. Every extra dollar means a free slice of pizza for a homeless person who needs a meal. So far, over 8400 slices have been donated! Read the full story and watch a clip of Mason’s appearance on the Ellen DeGeneres show here, then engage your family with these conversation starters:

The people who are donating slices of pizza at Rosa’s aren’t expecting to get anything back for their kindness, and they probably won’t ever meet the person who eats their pizza donation. When you do something nice, do you ever feel like you should be recognized or rewarded for it?

Is it easier to do good deeds when you know someone else will see you do it?

If you could secretly do a good deed for someone else, what would you choose to do? Why?

In the article, Mason Wartman says that sometimes homeless people even purchase slices of pizza to donate to others. Why do you think someone who has very little would be willing to donate their own money?

Customers at Rosa’s leave post-it notes on the walls with messages of hope, encouragement, and thanks. If you could donate a slice of pizza at Rosa’s, what would you write on your post-it note?

Mason Wartman says, “A lot of people … they ask homeless people for directions in my shop. They don’t even know that they’re communicating and interacting with them as equals. It’s really cool to build the community like that.»
What do you think he means by this statement?

If there was a restaurant like Rosa’s in every city, how do you think the world might change?