Beverage Recipes To Make With Kids 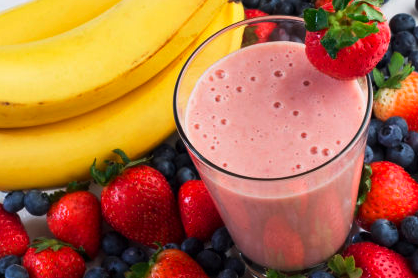 Recently, we received an email from a reader looking for beverage recipes that he and his kids (ages 7, 9 and 14) could make together. John Sarrouf, the Director of The Family Dinner Project, offers a few ideas:

This is a great question. Smoothies and drink recipes are a fun way to get everyone involved in the kitchen, and don’t take too much cleaning up afterwards! Here are a few of my favorites.

Hit the “blend” button for a few minutes, and you’re good to go!

Toss all the ingredients in and blend for a few minutes. This is definitely a favorite in my family.

This is another blender recipe. Squeeze the limes, then pour the juice into the blender. Add frozen or fresh raspberries, and as much sugar as you need (but not too much!). Add water and blend.

Chop Chop Magazine also has a whole section on drinks for kids. Check them out for even more ideas!

On the topic of making beverages with kids, Dr. Anne Fishel also offers this amusing story of making limeade with her sons:

One day, when my kids were young, my son Joe decided he really wanted to make a big pitcher of limeade. So, we went to the store and bought about a dozen limes. Even though he’s the younger brother, he usually took charge of projects like this, and he told his older brother, Gabe, to squeeze all the limes, which he did.

Several days later, we noticed that Gabe had a weird rash on each hand, between the thumb and first finger. I took him to the pediatrician, and several doctors were called in to look at the rash and were stumped. Then a nurse came in and said, «Either you’re pregnant or you’ve gotten a lot of lime juice on your hands, and then they were out in the sun.»

Since Gabe was an 11-year-old boy, we knew it was the latter!

Moral of the story? Wash your hands after making limeade!

Image above from The Healthy Haven.