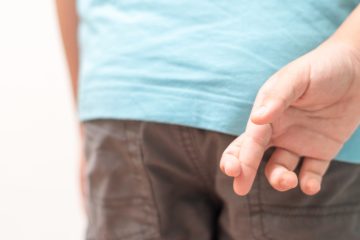 When my husband and I met, I learned quickly that he didn’t like chicken. He didn’t say much about his unusual dislike, and most people — including, I would discover, his own parents — didn’t know about it. How had a 19-year-old young man gotten by for so many years without anyone realizing that he didn’t enjoy a very commonplace food?

As it turns out, through deception. Strategically timed bathroom visits, pockets and the family dog helped.

It’s a funny situation, but it reminds me of the ways in which well-meaning parents (myself included!) can accidentally encourage dishonesty. As a child, my husband was worried about the reaction he would get from his parents if he complained at dinner. I should point out that my in-laws are very nice people, but no kid likes to hear “Stop being so picky!” or “Your mother worked hard to make this dinner – don’t make her feel bad!” When the reaction to admitting they don’t like a food is unpleasant, kids may lie for the sake of keeping the peace.

Parents lie about food, too. How many of us have bought one of those cookbooks featuring vegetables “sneaked” into kid favorites like smoothies? It’s almost become a parenting rite of passage to look your child in the eyes and say “No, honey, there’s no spinach in that,” despite having packed enough leaves into the blender to satisfy Popeye. Or there’s the trick that I used on my own kids when they were small: Just tell them they’re eating something they enjoy. My younger son refused meat until he got it into his head to start liking roast beef thanks to the Grinch and his “roast beast” dinner. After that, any type of meat was “Grinch meat” for a while. “Mom, what’s for dinner?” “Lamb – uh, Grinch meat.”

I’m not suggesting that these “white lies” are entirely harmful. I’m pretty sure that my now-10-year-old son is unscarred by having thought that every animal protein on his plate was USDA Prime Grinch. But I did have some explaining to do when he finally got wise, and no matter how good your intentions, it’s hard to explain to your child that you’ve been lying to them while still insisting that you value honesty.

There are other ways parents accidentally encourage dishonesty at mealtimes. For example, it’s a natural impulse to use family dinner as a time to check in with our kids, but “checking in” can feel like nagging. “Did you finish that Science project? What grade did you get on that test?” For a stressed-out teen who just wants to relax and eat, constant questioning — especially if the answers are not what Mom or Dad wants to hear — can be overwhelming. Rather than be honest and endure the conversation that’s sure to follow, many kids will lie in the moment to save face in front of the family.

And what about this classic situation: The kid who swears they’re “full,” then asks for a snack while you’re doing the dishes? Sometimes kids learn to lie about their fullness because they know that as soon as they say they’ve had enough dinner, they’ll get the dessert they really want. Sometimes it’s that they have trouble sitting for the duration of a meal, but their parents insist that they stay put, so “I’m full” is the magic key to getting permission to stand up and wiggle. Or, as in the case of my husband, a young child might say “I’m full” to avoid feeling forced to eat something they dislike.

What Should We Do?

So what’s a parent to do? First, keep mealtimes warm and positive. As you may have recognized, many of these examples hinge on parental reactions. If you criticize, force or lecture, the result can be a kid who finds it easier to lie than to be honest with you. Secondly, try to reserve family dinners for topics that don’t have the potential to lead to unpleasantness. You can talk about grades another time. And when it comes to eating habits, do your best to stay neutral. Try serving meals deconstructed or family-style, and make sure there are plenty of “safe” items to choose from. After all, eating the salad and bread while politely passing on the chicken is a lot more pleasant for everyone than sneaking food into the bathroom to flush it down the toilet.

Not that I — or my husband — would know anything about that.

Family Dinner Conversation Starters About Graduation
Telling Tales at the Table
Real Family Dinner Projects: The Carr Family
How to Talk About the Border