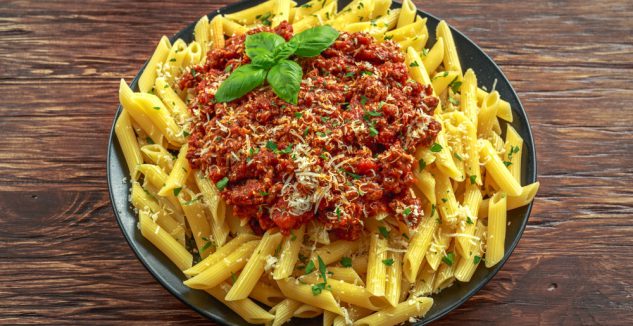 This recipe comes to us from team member Bri, who shares it in honor of her dad. “My dad isn’t much of a foodie — he has very simple tastes and he grew up in a family where they ate pretty plain, straightforward meals every night. He’s sort of the quintessential meat and potatoes guy,” she says. “So when he married my mother, who’s a great cook and much more adventurous, I think there was a little bit of a learning curve for both of them! She found this recipe for meat sauce in a cookbook they got as a wedding present, and at one of their first dinners as a married couple at my grandparents’ house, my dad told his mother that his new wife’s spaghetti was better than hers. It became sort of a family legend — the day Dad put his foot in his mouth big time! — but that spaghetti with meat sauce continued to be one of my father’s favorite meals.” Over the years, Bri has adapted her mom’s old recipe to her own family’s tastes, and this is her version of the family favorite.

1. In a large pot over medium heat, saute the onion and garlic in the olive oil until just softened, about 3-5  minutes.
2. Add the ground beef or turkey and cook, breaking up with a wooden spoon, until browned all over.
3. Add the tomatoes, water, tomato paste, and seasonings. Raise the heat to high and bring the mixture to a boil.
4. Reduce the heat to medium-low and cover. Simmer, stirring occasionally, for at least 20 minutes and up to 2 hours (the flavor will get richer the longer it cooks).
5. Serve over pasta.