Family Dinners are Great for the Body and the Soul 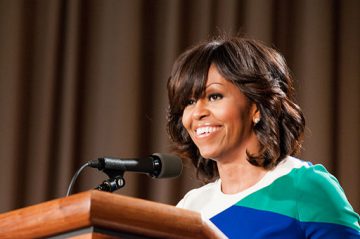 When Mrs. Obama appeared on the “Today” show recently, she voiced what many parents know intuitively – eating with your family is good for the body and the spirit of all family members. As she told reporter Jenna Bush, “Family dinners are absolutely important. Barack and I have tried to hold fast to the family dinner…that’s the time that you get to hear the little things in the voice of your kids that might be wrong or right. You can check their temperatures. It’s a great opportunity for Barack to forget about the worries of the world he carries around, and we can just be a family.”

In her commitment to lowering skyrocketing obesity rates, Mrs. Obama has been getting the message out for the past 5 years to eat more healthily and to get moving. She advocates that parents make simple changes at the dinner table (the same effective ones she made years ago when her pediatrician expressed some concern about her daughters’ weight) – eating more fruits and vegetables, eliminating processed and sugary foods, and cooking at home.

Anyone who has regular family dinners knows what the First Lady is talking about. Family dinners are the most reliable time of the day for us to connect and check in with one another. Dinner is a daily ritual that takes us away from the hubbub of everyday anxieties and can be a giant stress-reliever for kids as well as parents – and even the President. And, it’s just commonsense that home-cooked meals are generally more nutritious than fast-food, take-out, or restaurant meals.

If you’re already having regular dinners, you may not need any more convincing. But sometimes reading scientific data can be the extra nudge we need to change our behavior.

Regular dinners are good for the body

At family dinners, children eat more fruits and vegetables, vitamins and micronutrients, as well as fewer fried foods and soda, than they do at restaurants. In a very recent study, researchers found that home-cooked meals, as compared to ready-to-eat or fast-food meals, are lower in calories, even when the cook pays no attention to making a slimming meal.

These health benefits don’t come just from the food. The atmosphere at the table is a key ingredient. Researchers have found that warmth and positive communications are necessary to decrease the risk of obesity in children.

Don’t spoil the health benefits, by doing any of these:

Dinners are also good for the spirit

It’s not just the President who can put down his burdens when he eats family dinner. Researchers have found that when most families have dinner together, they experience a boost in positive mood and a decrease in stress levels. Teenagers report that dinner is the main time of the day when they talk to their parents. And these same teens who eat regularly (and talk regularly) with their parents feel more connected to them and have a more positive view of the future.

In addition to these positive associations to family dinner, there is a pile of studies that show that regular dinner is linked to lowering many high-risk behaviors, like smoking, marijuana use, binge-drinking, school problems, eating disorders and early sexual activity. In one large study of adolescents, regular family dinners were associated with lower rates of depression. Recently, a study found that kids who had been victims of cyberbullying suffered fewer damaging consequences from the bullying if they ate regular dinners.

None of these benefits require that you spend hours in the kitchen or serve organic parsnips. The most essential ingredients for a great family dinner are warmth and connection. If family members sit in cold silence or kids don’t feel comfortable talking, family dinner won’t confer any positive benefits. Sharing a healthy salad won’t transform a tense parent-child relationship, but it is the most reliable time of the day for parents to check their children’s emotional temperatures. The First Lady knows this first-hand from her own family dinners. The science supporting her is the icing on the cake.

A version of this article originally appeared on Psychology Today.

Rethinking Thanksgiving During COVID
Adding Competence and Rules into the Mix: Dinner with School-aged Kids
The Power of Table Talk
Do as I say, not as I TXT: Does Tech have a Place at the Table?
FLOTUS Michelle Obama cooking current events family kids let's move obamas parents