Goal: Reconnecting with the family
When Edward and Valerie joined The Family Dinner Project, family dinners in their household were rare. Each family member had different schedules – Valerie was attending school to earn a nursing degree, Edward stayed close to home due to a disability, and three of their young adult children were living at home and leading busy lives. Most nights, their children got fast food, eating at different times in separate parts of the house. Noticing their scattered dinners, Edward began to worry that he was growing “too distant” from his kids. He and his wife wanted to reconnect with them before they left the nest and also hoped to teach them how to cook (especially one son who could “burn water”). 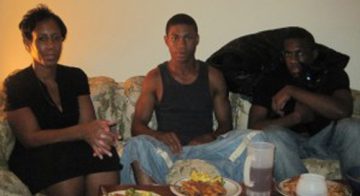 Progress: Creating excitement around dinner
While participating in The Family Dinner Project, Edward and Valerie found unique ways to get the family excited about dinners together. For one meal, each child picked an ingredient to create a dish, and their choices of “noodles,” “broccoli” and “meatballs” resulted in an original, delicious pasta. Edward also got the family talking about current events with “old school verses, new school rap” – the kids named a current song about something that’s happening in the world today, and the parents matched it with an old song. Although their conversations were fun and involved a lot of games, they also delved into more complex topics like girlfriends and problems at school.

In their words:
Edward said, “We got back some of what was lost in the family. Sitting down together, talking and laughing helped us get back a sense of closeness and family unity.”