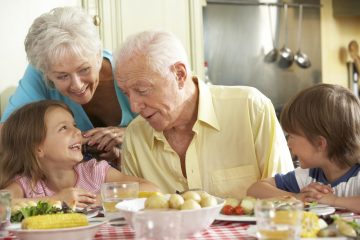 This Real Family Dinner Projects feature is a bit different from our others. Instead of featuring one family, we’re sharing a few bits of wisdom and reality from groups of grandparents we’ve worked with through some of our nonprofit community programs.

For the past few years, The Family Dinner Project has partnered with Grandparents Raising Grandchildren, an organization that offers support to elders who have custody of their grandchildren for a variety of reasons. Our workshops with their support groups help bridge generational divides and give the grandparents — many of whom are managing challenges like raising grandchildren with special needs, living on fixed incomes or dealing with technology and other 21st-century child-rearing complexities for the first time — concrete strategies they can use to make mealtimes a safe haven for everyone in the household.

All of the quotes gathered here came from participants in our 2017-2019 Grandparents Raising Grandchildren workshops across Massachusetts.

Some common themes that came up with these groups included improving communication with their grandchildren; increasing the number of family meals they ate together during a typical week; and decreasing the amount of technology used by family members during meals. The technology goals also often included the adults in the household, who frequently had developed a TV-watching habit during mealtimes and now wanted to re-establish screen-free mealtimes with their grandchildren.

“My grandson has problems with communication/expression. Bringing his iPad to the table sometimes initiates a problem.”

“I’m trying to have us sit at the table as we often catch up on DVR shows while we eat.”

While many of the challenges the grandparents faced in achieving their dinnertime goals were the same as any family — time pressures, picky eating, technology and distraction during dinner — there were also unique situations that made these families’ meals more difficult. Many of the families in the grandparent groups had been brought together because of generational trauma and family instability that caused parents to be at least temporarily unable to care for their children. In addition, some of the grandparents found that that the types of traditions, manners and behavioral expectations they grew up with have changed vastly, and that they needed to learn a whole new way of approaching mealtimes with their grandchildren.

“As a caregiver of a child with autism, family dinner is stressful. I have to be very cautious of conversation topics because so many things could be potential triggers for a meltdown.”

“Family dinner in my house is rough because my grandkids hate the dinner table. They’ve experienced a lot of abuse at their own dinner table. My littlest grandson is so terrified of the table that he won’t come near it.”

Using The Family Dinner Project’s conversation starter ideas and dinner table games has helped many of the grandparent-led families connect more easily at the table. Because there can be so many unique obstacles for these families to overcome, having ready-to-go ideas for table topics and activities helps relieve pressure and establish ways for grandparents and grandchildren to develop closer bonds during meals.

“We use family dinner as a way to build trust with our grandchildren and show them we’re not just ‘old people.'”

In addition, some of the families are using mealtimes as an opportunity to either shake up old traditions that didn’t work well for them in the past, or to bring back traditions that they want to pass along to their grandchildren. For example, one family decided to have family breakfasts to shake off a negative association with dinnertime. Another is bringing back a fond childhood memory:

“Growing up, my mother had a rule: ‘Don’t save the good stuff.’ We used the ‘good dishes’ anytime we wanted. It made dinner so special.”

Many of the grandparents involved in the workshops shared that they felt working with The Family Dinner Project reminded them of the importance of family dinners to creating a safe, loving and connected routine with their grandchildren. 100% of grandparents surveyed said they felt that their conversation habits at mealtimes would improve after the workshops.

“Family dinner is a way for us, as grandparents, to impart wisdom in a relaxed environment.”

Most of the adults shared with us that they felt mealtimes were a way to bridge the generational divide and create bonds with their grandchildren. They enjoyed having a dedicated time set aside each day (or several times a week) when the whole family could share food, fun and especially conversation.

“The conversation is always incredible. It doesn’t matter what we’re talking about, we always have a good time just talking.”

Do you have your own family dinner project to share with us, or would you like to learn more about how to involve The Family Dinner Project in your community group? We’d love to hear from you! Contact Us.

Dinner and a Movie: Women's History Month
How to Return to a Back-to-School Routine
Talking About The Great Pumpkin
How to Talk About the Border