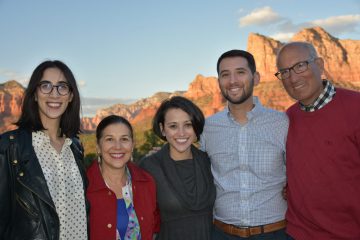 Meet the Darvick family! Faith and tradition were important foundations in the Darvick household as they raised their children, and now are coming full circle with the welcoming of a new generation. We’re inspired by their story of making dinners together such a strong priority that it’s now a tradition that keeps the whole family — grandparents, parents, and children — connected.

Debra and Martin Darvick, of Birmingham, Michigan; their daughter Emma, of Brooklyn, NY; and son Elliot, his wife Elizabeth, and a new baby daughter, who hail from Huntington Woods, Michigan.

“We are a Jewish family,” Debra shares, “and when the kids were little, we began having the traditional Friday night Sabbath dinner.” The Darvicks began inviting friends to join them on Fridays, and eventually, “My daughter and her friends recalled Friday nights as one big party.” Sharing the weekly meal with friends meant they could also share the workload — each family would contribute a potluck dish, and after the meal, everyone would stay for extra fun and conversation together. But when the kids grew up, the families stopped gathering as frequently. Mealtimes went back to the individual households.

“Now things are shifting again, and we’re back to gathering.” Debra says. “Not every week perhaps but definitely twice a month or so. So the goal would be to keep recapturing what we planted all those years ago.”

When the Darvick kids were teens, the biggest challenge for Debra and Martin was making sure that they stuck with prioritizing their family dinners, despite the usual scheduling challenges that come with raising kids. Debra says she was determined that “high school activities were not going to be more important than this family tradition,” even though it sometimes meant she encountered resistance, especially from son Elliott. Still, the Darvicks persisted in making Friday night dinner the rule rather than the exception, allowing the kids to go out with friends later but not to skip the traditional family gathering.

“In high school we gave him five ‘get out of dinner’ passes, which he ended up rarely using. By junior year he confessed his gratitude for the dinners…our ‘strictness about these stupid dinners’ gave him a great out when his friends tried to sway him to challenge us.”

Debra says that for her family, keeping dinners fun and special was the key. The Darvicks accomplished that goal by always inviting friends so that everyone at the table had someone special to be with. But she stresses that “fun” and “special” don’t have to mean that dinnertime is perfect — she learned along the way that it was best to relax and let things be casual. At the Friday night Shabbat dinners in the Darvick household, Debra recalls that the traditional blessings and candles were offered alongside potluck dishes. Conversations were steered towards what the kids were learning in school, and purposely kept away from distressing or irritating topics like taxes, politics or wars whenever possible. “The idea was to make it very special with extra good food, having company or going to friends’ houses.”

While the Darvicks’ Shabbat dinners were usually potluck-style to help share the burden among the families, there were some favorite recipes that have stayed on the menu and will now be shared with their new grandchild as she grows into family dinners. 40 Clove Garlic Chicken is one staple on Debra’s table.

Realizing how important family dinners were to her, her husband and children for so many years, Debra is now focusing on reclaiming the tradition and passing it on to the next generation. As her new granddaughter grows, Debra plans to share some of the conversation starters, ideas and resources from The Family Dinner Project with her son Elliott and his wife and help them incorporate them into a new Shabbat dinner tradition.

“We went to their house for the first Sabbath dinner after they brought the baby home from the hospital. I cannot tell you how wondrous it was to watch my son hold his daughter as he blessed her, and as he recited the blessing praising his wife. I realized that the tradition I began, somewhat shyly and uncertainly so many years before, was now gracing a third generation.”

Debra says that for her, the best part of family dinners was “the deep feeling of connection to generations before me who made Sabbath dinner a priority and the idea that Jewish families across the world (not all but many) were doing much the same thing….The feeling that we were anchoring our kids to something beyond us all.” To other families who are now considering starting a family dinner routine, she says: “Do it! Whatever works for your family, set aside the phones and devices. Focus on one another. Modify how many teams the kids are on and how much you will allow those outside activities to shred family life.”