Talking with Your Teen at the Table 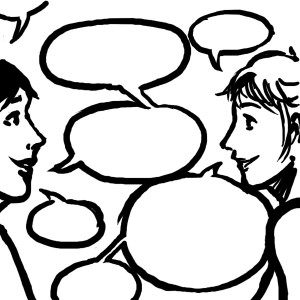 Before I had kids and when they were very small, I used to fear the teen years. Visions of my sweet cuddling tots turned into Goth, rude teens hiding in their rooms with earbuds in danced through my brain. Now with two (nearly three) teens at home, I am no longer afraid. Their reality is a thing of wonder to me. They are not rude. Quiet at times but not rude. I have to pull out the ear buds often but they do not sulk behind closed doors. And most reassuring, they are still quite cuddly—when they want to be.

Given all this, I can be taken aback when they momentarily act like “real” teens.

Family dinnertime is sacred in my house. Even through change, upheaval and redefinition of family itself, dinners together are a priority. Last night at dinner, I asked the kids why they thought dinners together were so important. My middle child said with a snarky tone, “Because they keep us connected at the heart.” Her hands acted this out with fingers first intertwined and then in the shape of a heart. Eyes rolled. But then, thankfully, there came a smile.

The evidence that eating meals with family is good for kids’ health, even very young kids, continues to grow. In 2010, a study of nearly 9,000 four-year-old children published in the journal Pediatrics concluded (in part) that young children who regularly ate the evening meal with their family had a significantly lower prevalence of obesity. A 2011 meta-analysis in Pediatrics examined three concerns: obesity, unhealthy eating and disordered eating. It found that each of these negative behaviors was decreased in children and teens that ate at least three meals a week with their family. Another study of almost 3,000 ethnically diverse eighth graders showed that their parents more often discussed healthy eating and served healthy options if they ate together.

Frequent family meals appear to also have a positive effect on teens’ emotional well-being, risk of depression and risk-taking behaviors. Teens from single parent or step-family homes have an increased risk of a variety of negative behaviors and yet, eating together appears to reduce this association in regards to reduced rates of sexual activity, alcohol, tobacco and cannabis use specifically.

The what, where and length of family dinners are  also a focus of study.  Last fall a small study in the journal Obesity reported that parents and teens both had lower body mass index (or BMIs)  if they sat together in the kitchen or dining room for dinner. Boys’ BMIs were lower if they remained there until everyone was done. (Breakfasts together count also.) An observational study of families whose dinners were videotaped demonstrated that dinners do not have to be long or elaborate affairs but need to have at least one adult present in order to be associated with tens having a lower BMI and higher vegetable intake. The families that succeeded in these health measures were also observed to have positive interpersonal interactions at mealtimes: they shared information and expressed feelings and concern for each other. They had clear rules for behavior at the table and shared roles in dinner service. In the May 2010 issue of Journal of Health Psychology, teens’ experience during mealtime was found to be connected with a decreased rate of substance use.

Looking at all of this evidence makes it clear that we need to eat dinner with our kids for the sake of their health. The dinners do not have to be fancy or long but the behavior around the table counts. We need to cultivate ways to make our dinnertime conversations meaningful, interesting and thought-provoking.

Around my table, we have through the years talked about almost everything. Any topic is acceptable if brought up with good intention and true curiosity. Politics, sex, religion? We’ve covered them all. We’ve played games. I have repeatedly been accused of being a pain about their manners. There have been giggles, anger and tears. We rate the meals so I know whether to cook the recipes again. Lots of meals have been rejected. And instead of cooking, many pizzas have been ordered.

Now with so many sports teams, part-time jobs, extracurricular activities and social engagements that my head spins, we don’t all sit together every night. But, whoever is at home sits and talks. Sometimes I wait up and eat with the late-after-practice arrivers. Sundays we all meet – even if other invitations have to be turned down. I’d like to think this commitment has paid off through the years.

My eldest can be a bit quiet. I generalize this into fitting his teen boy status – they all keep to themselves a bit don’t they? Once not too long ago, I challenged him on his laconic nature. I asked if he would talk to me when it really mattered. He stopped, looked at me and said yes. I asked why. How could I be sure? He explained that he knew I could handle talking about anything. After all, we do just that on any given Sunday around the table.

Kate Land M.D. is a practicing pediatrician and a mom of three. Dinnertimes with her kids are a priority. In between school, sports and work her family sits to eat and talk about their days–even if the conversations get a bit spicy and loud! Kate blogs at mdmommusings.com and tweets about parenting and child health at Twitter.com/KateLandMD