The Food Tells the Story 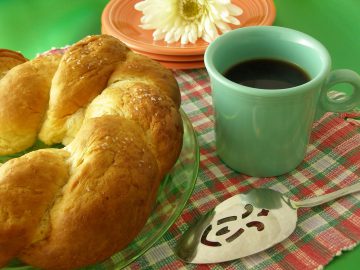 “Patrick, do you know about Great-Uncle Olof?”

My 10-year-old son, Liam, is tearing into a piece of homemade bread scented with cardamom and sprinkled with pearl sugar. Perched on kitchen stools, he and his younger brother have been waiting all day for the loaves to come out of the oven. We only bake this bread once a year, so when the big day arrives, my boys treat it like a major event.

Patrick, age 8, gives his brother a withering look. “Of course I know about Uncle Olof,” he mumbles around chipmunk cheeks stuffed with sweet dough. “He lived on the farm.”

“Except it wasn’t really the farm anymore, after the barns burned,” Liam argues.

“And all the cows died,” Patrick jumps in, proving that he knows the story as well as anyone.

“And Uncle Olof had to start driving a truck instead, but he still had a big huge garden and he lived like a farmer his whole life.”

“And he taught Mom to make this bread!”

Their eyes swivel to me, triumphant. They know the story of the bread, a Swedish recipe passed down from my great-grandmother, who served it every day as part of fika — the afternoon break for coffee and sweets that she observed without fail even after immigrating to New England and raising her children while helping to run the family’s dairy farm. The recipe makes eight loaves, enough to keep the fika table stocked for a week. Nanny baked the bread every weekend and taught her son, Olof, the recipe. He also baked it every week throughout his life, and kept a freezer stocked with extra loaves to give to friends and family. And when I was fourteen, he passed the recipe down to me.

Every time I bake the bread, even my husband chimes in: “Remember his hands? He had the biggest hands I’ve ever seen.”

“How big?” the boys will invariably ask, even though they know the answer.

“As big as hams,” we always reply, and they’ll stretch their fingers out in front of their eyes wonderingly.

I can’t bake the eight labor-intensive loaves every week the way they did on the farm, so we settle for making the bread a once-a-year treat. But there are countless family stories to be told through the foods we cook. Meatballs and manicotti are an excuse for my husband to reminisce about his Aunt Lou, the family matriarch who fed him “second dinners” on holidays and welcomed me to an overwhelming Easter feast soon after we’d started dating. Potato pancakes remind me of my grandparents and Christmas smorgasbords. Our annual corned beef dinner inspires my mother-in-law to trace her Irish lineage with the kids. And tucked into my wallet is a hand-written recipe card from my maternal grandmother, for the raisin-filled sugar cookies she always baked for my father. I’ve now taken over the raisin cookie duties, and just like the bread, the cookies tell the story almost on their own:

“Great-Grandma K. always made these for Grampa when he was little, right, Mom?”

“And that was when Grampa and his brother got in trouble for having a squash fight in the barn?”

“And they ruined all the squash, right? And what did Great-Grandpa do to them?”

When my boys grow up, I don’t know which recipes and stories they’ll take with them. But just as the old recipes have family stories to tell, every time we cook together or sit down to the table for dinner as a family, I know we’re spinning new stories that they can share with their children one day.

Try using these questions as a starting point to help tell the stories behind your family recipes: