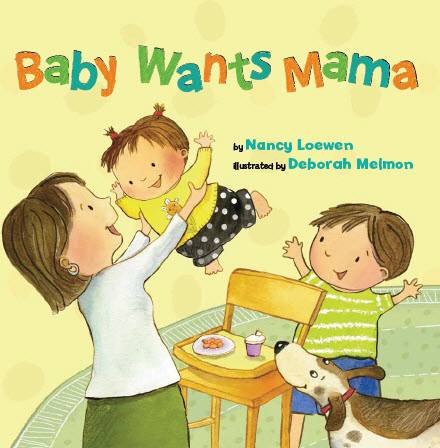 This is the first stanza of BABY WANTS MAMA, new book for very young children by author Nancy Loewen. It’s about that crazy hour right before dinner. Everyone in the family wants something, including the pets.  But what do they want most of all? To sit down and eat!

Where did the idea for this book come from?

I got the idea for the book from my son, when he was little. I’d been laughing at something his younger sister said, and I guess he wanted to top her, because all of a sudden he planted himself in front of me and blurted out, “Baby wants Mama. Cat wants fish!”

And then he ran off, and I was left scratching my head.

Here and there, over the years, I kept on scratching my head over those oddly intriguing words. And eventually, all of that head scratching turned into this book. The early drafts of the manuscript were more general—just a peek into the routine activities of a family with young children. But, as often happens in real life, all of the characters somehow ended up gathered around the dinner table.

So what were family dinners really like when your kids were growing up?

With a book like this to my name, you might think that in my own home, we’ve got the family dinner thing all figured out.

The little boy who inspired this book is now 18, and his sister is 16. Between work schedules, activities, teenage mood swings, and a husband who is frequently away from home, family dinners don’t happen as often as they used to.

Truth be told, even when the kids were younger, our family dinners didn’t always go so well. My husband and I were exasperated with picky eating, poor table manners—and, for a year or two anyway, our son’s inexplicable habit of tipping his chair, to the point where a wipeout and concussion seemed a real possibility.

On their parts, the kids resented our changing rules and our nagging. And I never did learn how to keep certain information to myself. “Try some, it’s healthy!” I’d say brightly about a new dish—which, of course, meant that no one wanted to touch it except for me.

No, a lot of the time, we didn’t get it right. I felt frustrated and even ashamed. I knew how important family dinners were.

What were family dinners like when you were a kid?

I grew up in a small, close-knit farm family.  My parents and my brother and I ate nearly all of our meals together, and our snacks, too. And much of what we ate was grown in our own garden. Eating together—peacefully and healthfully—wasn’t anything we had to work at. It just happened. So why couldn’t I do the same with my own family?

The answer to that question, of course, has to do with changes in our culture and with the complex personalities of each family member. Answering that question would probably fill a book—and I don’t mean a 75-word rhyming book for toddlers.

But I don’t have time for regrets. Next year, my son will be attending college. My daughter will be attending an arts high school, and even though it’s a public school, she’ll be boarding there during the week. We don’t have a lot of time left in which to share the daily routine of meals. So instead of wishing things had been different, I’m choosing to celebrate the things we did right.

Because I work out of my home, I was with the kids in the summers. At lunchtime and sometimes dinner as well, I would read out loud as they ate. We read A Wrinkle in Time that way, and a couple of the Harry Potter books, among others. It was a win-win-win situation: the kids ate quietly, we were all taking in some great books, and we were together. (Plus, when they were done eating, I got to eat by myself while I read the paper—and not feel the least bit guilty!)

Sharing the day’s highlights has definitely been a goal for most family meals. But on cranky days, it works better to take our minds off ourselves. Then we take out question cards from games (or now I might go to your Conversation Starters instead!). Here are some of the questions we’ve used:

If you were forced to give your life savings to a single charity, which would you choose?

On a scale from one to ten, how cool is the outfit you are wearing right now?

If you could own one type of store, what would it be?

What is/was your favorite stuffed animal?

Another game with great questions is “Would You Rather….?” I used this one just recently. My daughter was having boyfriend troubles, and the timing was terrible—she was about to go to her very first job interview, and she’d hardly eaten all day! Somehow I had to get her to both eat and mellow out, in the space of about thirty minutes. Luckily I’d just made one of her favorite dishes (a tuna casserole of sorts that we lovingly call “glop”) and I insisted that we sit down at the table. I dished out the glop. And I pulled out the “Would You Rather…?” cards.

Would you rather be trapped in an elevator packed with wet dogs OR with 3 sweaty fat men with bad breath?

That did the trick. Her interview went well .

So, even though we may not have lived up to the ideal, I think that our kids do understand that there is a great deal of value in coming together as a family to share a meal. No matter what gets eaten or not, or what gets said or not—no matter if the dog barks for scraps or the chair-tipping boy finally crashes to the floor, the mere act of sharing the experience strengthens the bond between all of us. 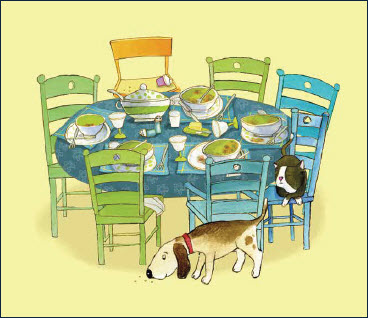 Win a signed copy of BABY WANTS MAMA! Go to www.nancyloewen.com. The contest is on the News and Events page. Ends July 1.

To Find out more about BABY WANTS MAMA at Children’s Literature Network: http://www.childrensliteraturenetwork.org/magazine/just-launched/2013/05/baby-wants-mama/