A Whale of a Problem 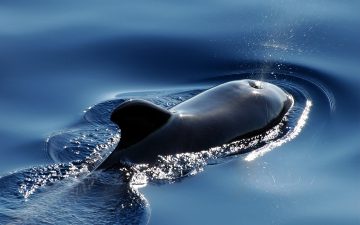 Nature is wondrous, but it can be cruel. In New Zealand this year, hundreds of pilot whales washed ashore. Despite heroic efforts from experts and volunteers to refloat them and return them to the ocean, many of them died. You can read more and watch a short video here.

Andrew Lamason is with the New Zealand Department of Conservation and was involved in the rescue effort. He was interviewed by NPR’s Scott Simon. It’s the last part of this interview that raises some important questions. Here is a portion of the transcript of their conversation:

SIMON:
I have to ask you to try and put a picture in our minds of what this must look like to see so many magnificent creatures in such pain.
LAMASON:
Yeah, it’s quite an awesome sight. It’s an area where there’s crystal-clear waters and a big, long sweep about 26 kilometers long of golden sand and sand dunes. And then with these – the whole high tide line just covered in these large, black bodies as these pilot whales sort of thrash around.
SIMON:
I gather that there were an awful lot of volunteers who came to this remote area to try to help. What can volunteers do, Mr. Lamason?
LAMASON:
Well, we have basically two phases of a rescue attempt, and there’s a wet phase and a dry phase. And the wet phase, all those with wetsuits available, they get around the whales, they try and support them as upright as they possibly can, let the tide come in and then float them off. And then and the last stranding we had, we formed a large human chain to try and make a barrier to prevent those whales from turning around and swimming back in and re-stranding. That’s the wet phase, and that’s the sort of more glamorous and exciting bit. But we have a huge demand on people to work through the dry phase, and that’s when the whale’s fully beached. And so there’s – they’re completely stranded. There’s no water around them. And we get out there and we get old sheets off beds and cover all the whales and then bucket water onto them, avoiding their blowholes and keeping away from their tails, which can give a nasty blow, and then try and keep them wet as long as we can. And that can be six, seven, eight hours out in the sun and the wind, waiting for that tide to come back again and then get them back out into sea.
SIMON:
What’s it like, Mr. Lamason, to see one of these whales up close, struggling for breath, struggling to live?
LAMASON:
It’s terrible. It’s terrible. It’s an incredibly emotional thing to go through. You know, I find it difficult.
SIMON:
Oh, gosh. Mr. Lamason, do we know why the whales do this?
LAMASON:
We don’t know. And there’s a lot of theories around. But if you had to design a piece of landscape to capture whales, Golden Bay is pretty much perfect. It’s a – quite a closed-in bay. It’s got this large spit sweeping around, and the seabed out from there is very shallow for quite some kilometers. And there’s a great chance that these whales were coming in here to feed and have made a poor choice about how close they can get in.
SIMON:
And is there anything human beings can or should do to try and help the whales?
LAMASON:
Yeah, that’s an interesting question. When these whales die, they actually initiate an ecosystem around them and it brings in a lot of wildlife that wouldn’t necessarily be around. So people are saying, well, why don’t you get out there and stop them stranding in the first place? Well, as I mentioned earlier, they’re relying on this area for food. It’ll be a little bit like closing the supermarket because you’re worried about the shelves falling on people. They need to get in there. And if some of them die, well, that is – that’s very sad. But also, there’s a lot of other animals that make – you know, take advantage of their carcasses as well. So it’s a – it’s an interesting question.

Talk about the dilemma raised here: